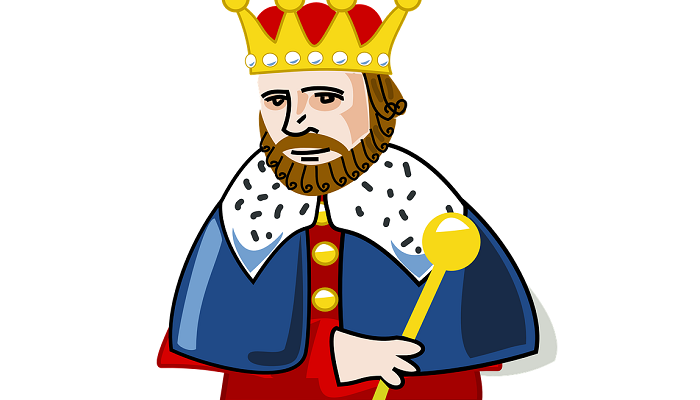 Kings are, more or less, a thing of the past. But, dreams featuring them are relatively common. A king in a dream may be associated with situations involving people in power or wanting power.

Take the King as a metaphor for a president, manager, or just head of household. All of them have some kind of control over others. Those are examples of men upon who we usually project the king archetype.

King symbolism is fascinating in the Celtic culture. Kings were elected by the nobles from the warrior caste’s members but under the druids’ supervision and religious sanction.

A king was a warrior by birth, by training, and closely akin to the priesthood, so his symbolic color was white, like the druids. Their presence on the field was vital, as the proverb says: ‘Battles are not won unles the Kunlesss there’.

Opposing to tyrants and dictators, who lead by force and violence, with a passion for power, kings assure tranquility and morality in the ranks of their own dominion. The King’s appearance in a dream may represent taking charge of a particular situation, mediating a dispute, using organizational, ethical, and spiritual wisdom.

Symbol of power and strenght

Throughout history, kings and queens have represented the powerful force that creates and sustains life. This force has two primary drives: self-preservation (masculine) and species preservation (feminine).

The King archetype is a symbol of the drive to promote one’s individuality, protection and guarantee the prosperity of the “tribe” on which one depends for survival.

In terms of our inner growth, Carl Jung saw the King as a symbol of individualism, differentiation from social groups. The King and Queen, together, represent the masculine and feminine authorities of the psyche.

Issues with a dominant male figure 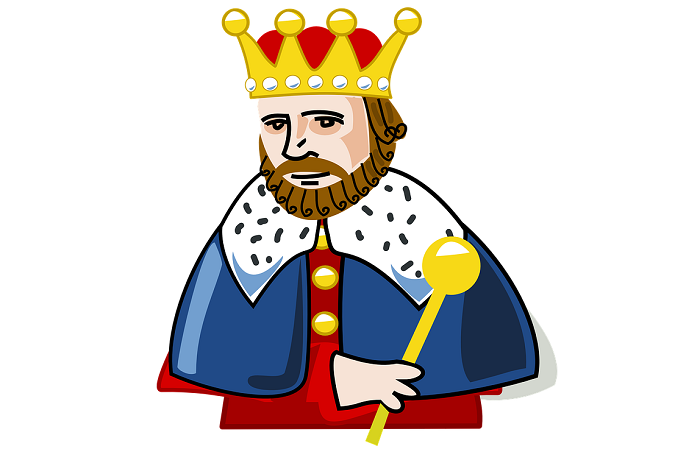 Dreams with kings appearing in them often reveal issues related to a dominant male asserting authority. Anyone in a position of power could metaphorically be described as a king.

Dream interpretation research has shown that it symbolizes the best approach, the power to make your own decisions, a sense of control, reflecting over a period of time, pandering to someone’s every wish, someone’s time in charge.

A king in a dream is often associated with one’s need to be the one that decides the best approach to something. Kings have power and authority; they make their own decisions.

If you dreamed about a king, ask yourself, do you have control over your life, or are you afraid of losing it? Do you wish to make your own decisions? How valuable is your independence to you?

Have you been thinking lately about how you’re wasting precious time? Kings in dreams can reveal precisely that. A not just that; they also show issues with power. Do you wish to take control back from someone? Are you amazed by someone who wishes to be influential?

A king in a dream sometimes represents your sense of achievement.

When searching for the meaning of the dreams we have, it’s essential to always be aware of one thing. Dreams usually represent the critical thoughts you have, and those pinpoint your current problems.

A king in a dream reflects an aspect of one’s personality with control and power. It represents a personality trait that is confident, unstoppable, and overall dominant. Maybe even authoritative, expecting royal treatment.

However, it’s about fierce independence also.

Need for control and dominance

On the negative side, a king may represent an arrogant need for total control and the difficulty of giving up absolute power.

Sometimes these dreams reflect feelings toward a person controlling you, someone you’re having a hard time dealing with.

A dream about a king could also reveal the feeling that someone is challenging your dominance or leadership. It may indicate that someone is too assertive, and you feel intimidated by that.

Seeing a king die in a dream signifies a loss of confidence in a particular area of your life.

Generally, a king can hold both excellent and lousy symbolism, depending on the dream scenario, details, and your feelings about the dream.

Spiritual meaning of King in a dream

To see a royal king appear in your dream means you are a spiritual leader, a person that can influence other people and empower them to overcome their obstacles and deal with the challenges of life.

The King represents the male energy, an aspect of one’s personality that makes other people follow you and listen to what you have to say and advise.

There are various dream scenarios featuring kings. They can have different meanings, depending on the details, overall sense of the dream, and your current life circumstances and inner thoughts.

Dreaming of a fairytale king signifies the company of a man whose company you enjoy. Sometimes this dream indicates encountering new, quality people who may even become your friends.

This dream could also suggest that you maybe have a subjective approach to a specific person in your life and are not agreeing with all their decisions and actions.

A dream of being a king

If you were the King, such a dream reveals that you have positive energy, an incredible feeling of self-worth, and the power to go forward in life.

But, if you were a prince in the dream, that means that you yet have to discover and develop your true potential. You still have space to grow and ultimately reach enlightenment.

The other interpretation of this dream says that you may be a little bit spoiled, thus upsetting the people surrounding you.

To dream of being a king reveals that you have achieved a lot lately, in a spiritual sense. Nevertheless, you still have a lot to learn, and you have to use those lessons in practice. In this sense, the dream symbolizes your youth and mental, spiritual development.

Alternative interpretation says that the dream you are the King reveals your authoritative nature and dominance to the point of tyranny. Maybe you are acting a little spoiled sometimes?

In some cases, to dream that you are a king signifies jealousy certain people feel of you.

Seeing a king in a dream

This dream could also suggest that you desire to meet the ideal man for yourself.

To dream about kings symbolizes the desire to be the best or perceived as such.

Talking to a king

Talking to a king in a dream indicates successful life for you while having a dialogue with him signifies your courage to take on the responsibility. You are fearless of contradictions and pain. Because of that, you could eventually become famous and be greatly honored.

If you talked with the King respectfully, this dream signifies fulfillment of your goals and plans, as well as favorable life circumstances.

To be too familiar with the King in your dream indicates the failure of plans and loss of hope. If you were crowned a king in a dream, it means that you will possibly have to help someone in your life, a person that will ask for your advice or cooperation.

On the other hand, this dream might reflect the leadership qualities of the dreamer. Those will help you reach great success in your life.
Dreaming about a cards’ King

A dream about a cards’ King indicates a stroke of good luck in risky situations or endeavors. A female that dreams about two kings of hearts or two kings of diamonds should consider the dream a warning of troubles on the romantic front. It suggests the possibility of having to choose between two admirers in real life.

The King of spades indicates a partner highly socially ranked, with a lot of power. A king of clubs suggests talking with governmental authorities.

A dream about marrying a king signifies pleasant acquaintance with a wealthy and prominent person. If a woman dreams about her partner as a king, this dream could symbolize the change in their relationship. To be more concrete, the man could become protective over a woman.

If you dreamed about kissing a member of a royal family, you should be careful. This dream

A quarrel with a king

Quarreling with the King indicates possible loss of benefits, even freedom, due to inappropriate speaking. You should mind your tongue and be more careful.

A dream about a king dying represents a loss of confidence in a specific aspect of your life. Sometimes it means a person in your life that usually always gets their way but won’t be able to no longer.

Being punished by a king

To dream of being punished by a king indicates that you’re overlooking important things at work and could trigger your boss’s anger.

Being a king, sitting in a palace

A dream about being a king sitting in the palace indicates good luck on your path. If you are currently facing some difficulties in your waking life, this dream suggests that you will soon overcome those. You might also receive excellent news from your bosses. If you’re an entrepreneur, you should expect a fantastic and lucrative period.

Being summoned by a king

If you dreamt of being summoned by the King, this is an excellent sign. This dream indicates news that your family is going to celebrate.

Some happy events in the family are soon gonna happen, but those could also bring you a new, pretty heavy responsibility. However, that opportunity will allow you to show your strength and talent to people. Some of them might become envious of you.

A dream about wearing a uniform to see the King suggests meeting a person to help you achieve your goals and desires.

A dream about king coming to your home

A king that comes to your home is a perfect dream. It indicates a happy event in your home, one that will bring significant benefits to your children’s future. You will lead a prosperous life.

A dream in which a king offers you a drink is also a great one to have. It indicates that all your efforts and work will pay off. Your status will drastically improve.

If you are, by any chance, a housewife, this dream indicates that your husband will be fortunate.

Females dreaming about a king

If you are a female and dreamed of standing in front of the King, this dream carries a nice message. This dream indicates marrying a majestic but fearsome man.

If the King appearing in your dream looked elegant and was dressed really royally and lovely, this dream might suggest your big ego and pride.

A king on a horse

A dream about a king on a horse reflects content with your beautiful life. This could trigger some envy in particular people in your surroundings, but you don’t need to be worried.

Although the King typically symbolizes power, dominance, and leadership, he can also be the omen of bad news, possibly even sadness ahead.

On the other hand, it indicates possible pleasant and exciting discovery.

A king, or an emperor in a dream, suggests the protection of the person in power.

As we’ve seen, a king as a symbol can be good and evil, depending on who he is and his actions.

To learn more about your inner health and the strength of your king energy, you should notice the way these dream figures treat you and others. Consider how your dream ego feels and behaves.

In reality, the difficulties you experience as a leader and how you feel and respond to them are directly linked to the maturity of your own personal king archetype.
s
It’s important to note that the King is also conceived as a higher ego projection, a specific ideal to be realized. In this sense, the King becomes the archetype of human perfection and energizes every spiritual element to that end.

You should integrate both principles, masculine and feminine energy into awareness, so you can live and share wisdom and benevolence.