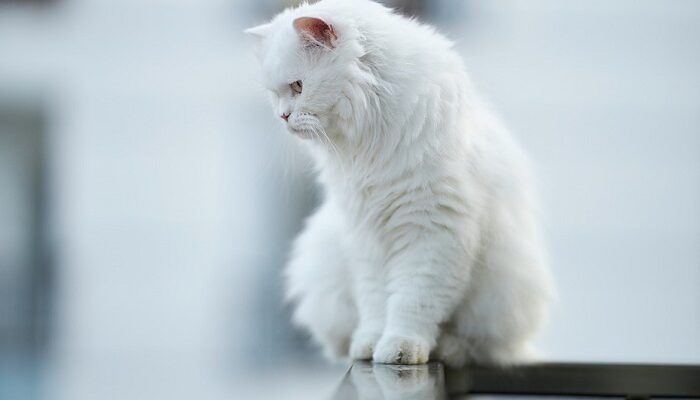 White cats are gorgeous felines; there is just something special about them. They look pure, esoteric, and have indeed played an essential role in the mystical world’s elements through history.

Egyptians had a cat goddess, which is associated with two sides; nature and personality.

For Sigmund Freud and Carl Jung, cats are associated with your own hidden subconscious mind. Jung stated that if you experienced a cat dream, you should definitely revise your inner thoughts. And not only that; you should also look within your sense of subconscious to find the true meaning.

Cats play a unique role, being so mysterious and sometimes incomprehensible. Cats play a massive role in many religions and beliefs, and their dominant position in the magical worlds is indisputable.

Understanding cats’ symbolism could be somewhat tricky because it’s not the same in all parts of the world.

Generally, cats are all about communications, carrying messages of spirit and astral realms. Their mysteriousness and secrecy have always been very intriguing.

It is believed in many parts of the world that these beautiful feline creatures are in constant communication with the spirit world.

Spiritually, they are considered to be a bridge between the realm of the seen and the unseen. If a cat appears in your life, someone or something is probably trying to tell you something.

To dream about a cat is a message; listen carefully and trust your intuition and inner voice.

The feline sometimes appears to let you know that you have the power and magic within you to create what you want of your life.

But, you have to believe in yourself and trust that you have the tools and skills necessary to accomplish all of your dreams and desires.

The cat as a totem animal 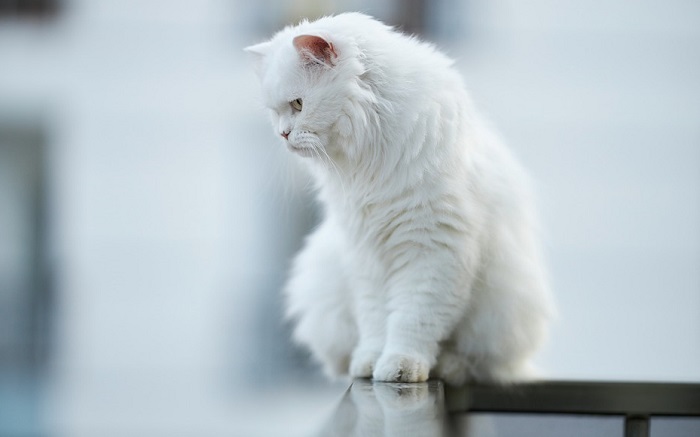 The cat is a mighty totem animal. If it’s white, representing purity and spirit, you could see how it holds extraordinary symbolism.

Typically, people with this feline as their spirit animal are generally extraordinarily psychic, very creative people. They are usually independent, unpredictable, and usually highly astute in all situations.

They often carry a sense of mystery about them and are reasonably selective when choosing their friends and company. They will rarely cave to peer pressure.

Those are all excellent traits, but those people should also be careful not the become too reclusive in determining their way of life.

Many people know about the reasonable amount of meanings about a black cat, but that is not the case with white felines. But that’s a shame since white cats are associated with many beliefs.

Cats were important in ancient civilizations; people took care of them with great care. These skillful creatures always fall on their paws, and they carry powerful symbolism.

Did you know that only five out of 100 cats are white? They are pretty rare. To fully understand the white cat’s importance in a symbolic sense, you should look at cats and colors separately.

The color white is generally associated with purity and perfection, or divinity. White is also a safe color; that’s why medicine workers and doctors saving lives wear white.

But, white color can also be perceived as cold, emotionless. Nevertheless, most interpretations and associations are positive and related to innocence and purity, which also translates into the white cat’s symbolism.

The white cat is a symbol of the spirit. Many people believe that white cats are souls returned to this world or spirit guides and messengers.

White felines have always been strongly linked to the world of spirit. It is believed that spirits often dwell inside those felines.

White cats are considered to be helpers of humans on their spiritual journey. If a white cat tries to befriend you, this is a sign that you are offered guidance.

Owning a white cat could be fruitful for your spiritual practice. It is considered to enrich spirituality by helping people receive guidance and energy from the astral plane more quickly.

White cat in a home is typically an omen of happiness and prosperity. Seeing a white cat cross your path indicates satisfaction on various levels and forms.

The symbolism of a white cat

Cats in a dream represent independence and powerfully feminine energy. They also represent grace and elegance.

Spiritual symbolism says that cats are associated with the ability to see or hear hidden things. From a mythical perspective, a cat is connected to our inner strength and courage.

To dream about a cat represents your independence, relaxation, ability to see things in front of you clearly, and the unconscious mind.

The general dream meaning of a cat is associated with wisdom, hidden visions, control, power, the ability to see clearly, which others may not be able to.

The symbolism behind white cat dreams

The dream world is an exciting and mysterious, sometimes even frightening place. But whatever we dream of, it’s often with good reason and an important message behind it.

The crucial thing to consider is that dreams don’t have the same meaning for everyone.

The true meaning and message of the dream depend on your personal situation, current life circumstances, feelings, and details. It’s essential to try and remember the emotions you had during the dream.

Deciphering dreams can be daunting, but it’s worth it. They are mediums for the messages of our unconscious.

Seeing a white cat in a dream is associated with rising in the light, no matter the destructions’ depths.

A white cat appearing in your vision might indicate that you will have to fight for yourself and for your dreams and desires.

White cats in dreams could represent the development of relationships with the opposite sex, focus on creativity, bad luck, or some spiritual issues.

Explanations of white cats’ dreams can get divergent, and at the same time, be related to hardships and upcoming problems while also symbolizing a peaceful future and beautiful events.

In a spiritual sense, a white cat is a messenger of important messages. In this case, you should mind the movements and hints the feline is giving you.

A white cat as a spirit guide in dreams

White cats often appear in the dreams of people that have been struggling with their spirituality. The cat’s elusiveness and mysteriousness in this sense refer to the next level of spiritual growth that has been just out of your grasp.

A pure white feline in a dream indicates that you will soon receive a message from the spirit, so you should pay close attention to the dream. The white cat emphasizes the spirit’s directive, making clear that you should focus on what is happening in your dream vision.

Ofen white cats symbolize spirits, guides trying to help you on your spiritual journey. If that is the case, you will wake up feeling like you want to connect to nature, with an urge to breathe deep, maybe even meditate.

The white cat also symbolizes difficult times ahead, serious challenges that you will have to deal with.

If that is the case with you, you will feel frightened upon waking up. You should not be very worried, though; it’s just that the Universe is warning you, giving you time to prepare for challenges ahead.

The hardships you will encounter will make you use your will and character strength, but you will eventually emerge on the other side a better person for it.

A warning of possible medical problems

The cat’s white color in a dream often represents specific medical concerns because many people associate a white color with a doctor’s white coats and a hospital’s sterile environment.

As said above, this dream does not have to necessarily mean that you will fall ill of some disease, but to notice that you might have a medical problem that’s still hidden. It could also mean that someone you know might fall ill.

If that is the case, you might wake up feeling achy and with a sore throat.

As already stated, white is the color of clearance and purity. And so is the white cat symbolism. The white feline symbolizes happiness, virtue, and good fortune.

A white-colored cat symbolizes patience, freedom, independence, mystery, curiosity, rebirth, and sensuality. They are fascinating, since they are pretty adventurous animals, spending most of their time exploring, playing, but on the other hand, sleeping a lot.

It is said that cats have nine lives and that every one of them is a sign of a new beginning. Like any other cat, the white cat also signifies rebirth.

White cats could be both considered a sign of good and bad luck. However, mostly it is considered to be a symbol of positivity.

To encounter them on the road means getting successful in everything that you do.

White cats are considered very calm and shy, so it’s no wonder that they symbolize tolerance and control. It is believed by many that white cats in a home help withstanding the harshness of life.

If a white cat visits you, that is considered an indication of money coming your way. A white feline represents financial success in the future.

A white sign is also a symbol of goodness and significant achievements.

Since cats are creatures that spend ample time sleeping, if you’ve seen a white can sleeping in your dream, this could mean that it’s maybe time you took a little rest. You probably need a break from whatever you’re doing.

Rest is crucial for dealing with the hardships of life. Remember not to be too harsh to yourself and take yourself lightly.

White cats are considered to be supporters of humans. Being highly connected to nature and the spirit realm, these felines are messengers that tell people to use their power to heal.

Cats possess great spiritual powers; it is believed that they enhance the psychic abilities of their owner.

Although you can rarely see a white cat, when you do, be sure that there is an important message it is trying to deliver to you.

The white cat symbolizes peace and tolerance, and if you’ve dreamt about this feline, it probably gave you a message that the best way to live is to live in harmony with the world.

White cats are also there to teach you to control your anger, fiery emotions and enjoy little things in life. It is teaching you balance and resistance to difficulties on your journey.

Many psychic communicators say they find themselves in the company of white cats reasonably often.

It seems that white cats have this spiritual connection, a strong ability to help and support their humans in raising their own vibration and resonance, tap into and connect with the divine, be it nature, spirits, or guides.

White cats are often born deaf; it’s the genetic trait associated with the white gene. Their deafness ramps up their dependence on their telepathic abilities and raise their ability to telepathically communicate with humans and facilitate the spirit’s teachings.

When it comes to omens, white cats possess contradictory symbolism.

In Egyptian and American culture, they are considered to be a sign of good luck, while the people of the UK regard them as bad luck.

Overall, a white cat is a symbol of positivity, good luck, fortune, and happiness.