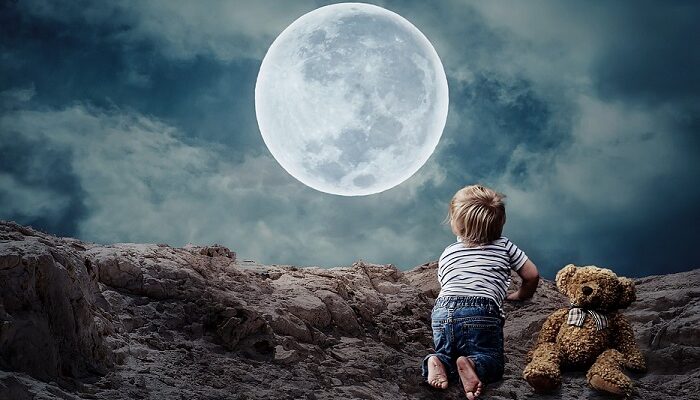 The Moon, the natural satellite of our planet, is essential for all living creatures on Earth. Its elliptical path has a significant influence on our planet.

There were rituals, festivities, and feasts where the Moon was celebrated. The lunar calendar is used in many countries, and that is also one of the facts that shows just how important the Moon is for people.

The Moon is one of the most beautiful and also mysterious motifs to appear in dreams. Still, when it occurs, it holds powerful symbolism.

Since ancient times, the Moon was associated with magic, mystery, imagination, beauty, and of course, the dream world.

Since old times, this stunning silver ‘ball’ has been an adoration object in many cultures worldwide. It was used as a symbol in various religious, mythological, and spiritual systems throughout the world.

The Moon was an incredible source of inspiration for Ancient Summer, Babylon, Greece, Rome, Egypt, China, and many more.

The Moon has an extraordinary impact on people. It’s quite impossible to see a bright moon on the clear sky and not gaze at it for at least a little way, right? Its beauty is haunting and magical.

More so because its light comes from the Sun. The Moon actually reflects its light, giving it an ever-changing shape.

The Moon is our Sun’s and our loyal companion. You could think of the Sun as our conscious and the Moon as our unconscious. Therefore, the Moon represents our personality’s fragile veil but strong in magic, inspiration, and imagination.

It represents the feminine principle that is strongly associated with fertility, nurture, care, and grace. Astrological symbolism sees the Moon as the representation of the Mother figure.

It is strongly associated with familial, intimate, and private. The Moon is ever-changing, traveling fast across the sky or zodiac. 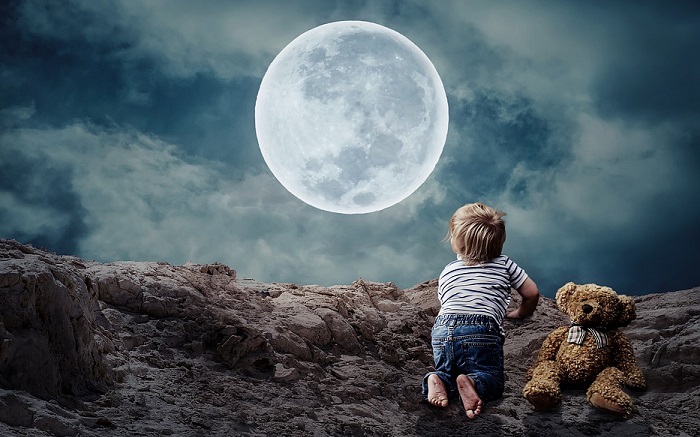 The Moon represents everything continuous; memories, dreams, visions, imagination, and inspiration. It also represents spirituality, a spiritual journey, discovering our inner self, and traveling to our souls’ most profound depth.

It symbolizes magic living inside all of us, even if the power of it sometimes amazes and other times scares us.

Dreaming about the Moon

The Moon is since forever been associated with night time and the dream world. That is no wonder since nighttime is the time when it’s most visible. It also appears in twilight hours, which for some people gives it a somewhat obscure tone.

Whether it is visible or not, the Moon often appears in our dreams. When it does, it holds powerful symbolism. It can reveal the hidden side of your personality, a feminine, gentle, sensitive, and romantic side, among other things.

As with all the dreams we have, Moon dreams’ meanings depend on the details of dreams, our current mental state, circumstances from reality, and hidden desires. Sometimes it represents a turbulent character, moodiness, as well as insecurity, restlessness, and lack of focus. It can also signify instability in the emotional sense.

Dreaming about the full Moon

The Full Moon is a popular motif in mythology, folk beliefs, literature, film, art, music, etc. It usually carries a mystical connotation. In mythology, the full Moon was always essential for shape-shifting, witches, and werewolves.

Although this gives it a somewhat ‘dark tone,’ it does not necessarily have to be that way depending on your understanding of stories and myths.

Sometimes, this dream signifies your inner self that would like to come out, but it cannot express it for some reason.

A beautiful and shiny full Moon represents completion, achievement, accomplishments, and closing of a particular circle. In this context, it reflects your satisfaction with your achievements thus far. You are content because you have met your personal desires.

This dream also represents a completion on a spiritual level, the fact that you have learned who you are in a spiritual sense. Even in full Moon messes with your sleep cycle. You sleep peacefully; you are content.

Dreaming about the crescent Moon

For most people, the crescent Moon is the most incredible shape of the Moon we can see. It really looks magical, and when it occurs in a dream, it should not be neglected.

The crescent Moon in a dream represents adjustments, adaptation, and changes following a cyclic pattern. Every person on this planet has their own way of living and follows their own design, regardless of specific universal laws.

This dream is a good one to have because it indicates a gradual adjustment in a smooth way—the understanding of the world and fitting in with your own uniqueness.

Dreaming about the lunar eclipse

This is a dream that can be interpreted in several different ways. Since The Moon represents femininity, a dream about the eclipse indicates a feminine, gentle, and nurturing side, overshadowed by something else.

That could be because of your own actions or the actions of someone else.

A lunar eclipse in a dream could, in this sense, signify that you let your colder, more challenging side dominate. That could be a consequence of the difficulties in your life that made you this way.

But if you had this dream, you can take is a suggestion to think about the traits that aren’t allowing your personality to shine.

If you can’t find your source of light in your life, this dream signifies an obstacle in your reality that blocks your inspiration and your path to your goals. Maybe something is clouding your vision?

Dreaming about touching the Moon

Well, this is one of the strangest dreams there is. The Moon sometimes really looks like you could touch it, but of course, that is absolutely impossible. But not in dreams, however. This magical scenario is usually associated with desires and ambitions.

It indicates your high expectations from yourself and your ambitions. It could also reveal your emotional desires, ideals, and fantasies.

Be careful with your ambitions, though. If you want something this badly, it could also be tormenting if it happens to be out of your reach.

Two moons in a dream are also strange and rarely occur. This could suggest that you have more than one great source of inspiration or more than one desire. Those do not have to be related, which could cause you to be torn between them.

This dream often appears to artistic and visionary people, individuals with restless and adventurous souls filled with questions and wonder.

Two moons in a dream also suggest that you have a double vision; you can see different versions of your inspiration. It could be that you don’t know which one to focus on since they both are appealing to you. At this point, you should give yourself some time. There is even an expression of ‘walking on moons,’ which means that you should take time to rethink your current situation.

Dreaming about the Sun and the Moon

Seeing both the Sun and the Moon in a dream is considered very meaningful. But, the true meaning depends on your current situation in waking life.

If you had this dream, congratulations; it is a sign that your conscious and subconscious side are balanced. Not a lot of people have this trait. It means that your rational side corresponds with your emotional side. That means something really excellent; that you can trust your intellectual and analytical mind, as well as your feelings and intuition.

This dream signifies the ultimate inner balance, which is not easy to reach. Some people never do it.

So, if you had this dream, you can be delighted. You are on the right path to achieve your inner equilibrium.

On the other hand, if your overall sense of the dream wasn’t pleasant, it could hold a completely different meaning. Try to remember the Sun and the Moon. If they were opposed or conflicted, that could indicate a struggle on the inside. That could be a sign that your reason cannot control your emotional side, and you feel torn between them.

There is a positive side to that; if you dreamed that, it means that you’re aware of your imbalance and can now work on that.

Dreaming about the Moon and stars

Suppose the Moon in your dream was accompanied by many stars. In that case, that is a sign of your imaginative, dreamy side of personality.

The stars are there to make the Moon more beautiful, but they can never outshine it. So, in dreams, this picture represents your romantic and intuitive side, much supported.

You can find inspiration in every aspect of your life, and this creativity will lead you to great things in life.

Dreaming about destruction of the Moon

The dream where the Moon is destroyed by an asteroid or in some other way is not a good sign. This dream usually reflects a big disappointment in your own ideals. It indicates that you are facing the destruction of your dreams and vision.

It is said that the Moon’s appearance in a dream happens when you are growing, generally developing, in every sense. As we’ve already learned, the Moon has been a symbol of fertility and progress from ancient times.

Dream symbolism says that if you look at the Moon reflected in the water, that indicates that you will perhaps travel soon, maybe even overseas.

A dream of a Young Moon indicates a new beginning, a new relationship. It is a sign that your heart is clean and emotionally and spiritually ready for something new in your life. There is also an alternate interpretation that says a Young Moon’s appearance signifies increasing your estate.

The Red Moon symbol in a dream is a bad omen because it symbolizes war and sadness. Maybe you will be in a conflict with someone, or perhaps with yourself. Moons of any other color, like yellow, white, and pink, symbolize a passionate connection.

It’s important to note that dreams about the Moon are important because they hold great significance; they reveal a dreamer’s soul.

The most relevant aspect to look at to accurately decipher the dream is the Moon itself. The appearance of the central motif is essential to consider to find the true meaning of the dream.

Suppose you dreamt about a small Moon; that indicates that you should look out for the person you care about. It signifies the vulnerability of a close someone at this period. It tells you to support and hold space for that person.

The Moon has moving energy, fluctuating nature, and you should always keep that in mind when analyzing your Moon dreams.

Generally, it’s a powerful, good symbol, but sometimes it can have a bad meaning. Like the Moon, our inner state varies, so you should look at it from that perspective.

Our incredible companion, The Moon, represents our emotions deep inside. They need to be balanced, so we can progress in every aspect of our life.

In astrology, the Moon is strongly associated with the emotional body, related to moodiness, fulfillment, or happiness.

There is a superstition which many believe that says that the Moon affects people’s emotions and behavior.

Our bodies are mainly made of water, so many wonder if this Moon’s energy is similar to pulling ocean water.

In this sense, dreams about the Moon could symbolize drawing emotions to the surface, usually the ones that the dreamer yet needs to accept.

When the Moon is brightly illuminated, it holds a powerful message about your inner divine energy and high vibration. You are a being of light that leads you to rebirth, transformation, and progress.

Because of its mysterious nature, the Moon is waking hidden creative talents in humans and helps them reach a higher state of consciousness.