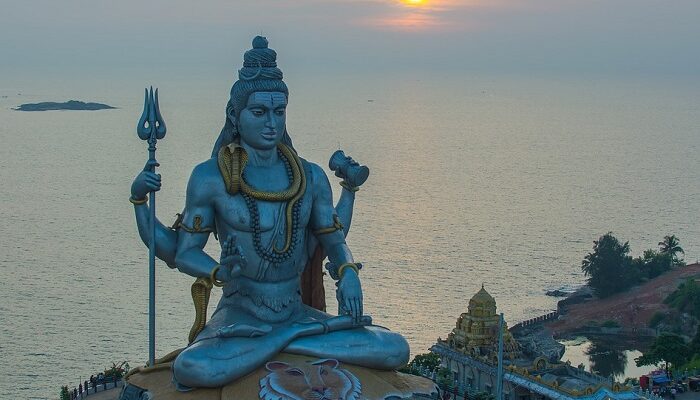 Shiva is one of the most important gods of Hinduism, capable of creating or destroying whatever he wants, because he is considered to dominate various supernatural forces in the cosmos.

Known as the god of destruction, Shiva, he actually has a great many positive attributes and in his own way preserves the universe. He is not only a warrior or an ascetic, he is also a loving “man of the house”.

Symbolism of the god Shiva Easily recognizable even among non-experts and of absolute importance in Hindu cosmology, the god Shiva is one of the three essential elements of the Trimurti and backbone of the Shivaite current, the branch of Hinduism that considers Shiva the be supreme.

His origins are extremely ancient and before he was called Shiva, he appeared in his Rigvedic form under the name of Rudra, an extremely powerful and stormy god who was called Shiva (auspicious) when he could control his fury.

But traces of Shiva also exist in Siberia, under the Arctic Circle, where in some form it seems to have been worshiped before the Ice Age.

Shiva and the Trimurti Shiva as we know it today finds its classical definition in the Puranas and Tantras where it takes on the role of destroyer in the Trimurti which includes Brahma (the creator) and Vishnu (the preserver).

In this sense, Shiva and Brahma are two aspects of an identical threshold, which can be crossed in two different directions.

Shiva and his consort Shakti In the Tantra we see Shiva not only associated with the other two elements of the Trimurti but accompanied to Shakti, to create a divine couple, thanks to her in fact, he accepts to be not only not only an ascetic, but also an exemplary husband.

Shiva represents the masculine aspect of the Absolute, or rather the inactive consciousness behind manifest things.

Shakti, the creative energy, gives shape to what Shiva conceives and in fact, Shiva is the only one able to stop it when it loses control by changing into a destructive form like Kali or Tara. 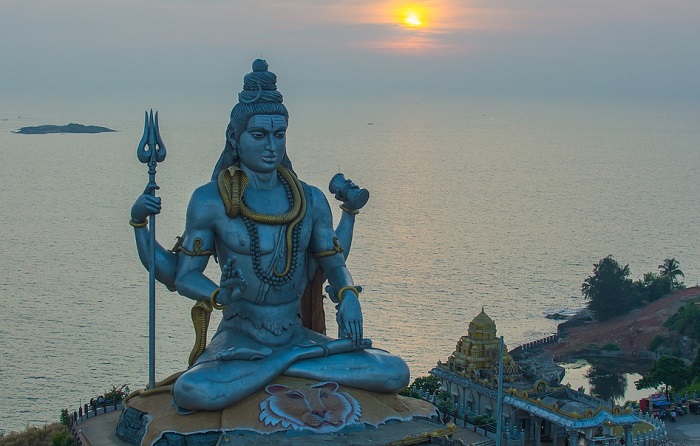 The symbols of the god Shiva But how can we recognize the god Shiva among all the other deities? It generally occurs in two aspects:

Generally it is represented with blue skin but in reality it would be a gray due to the ashes, symbol of the impermanence of forms. He has the third eye open, in fact in the Vedas he is referred to as “the one who has three eyes”.

Very often he rides a bull, Nandi. He is easily distinguished by the crescent moon in his hair, like a crown of immortality. He brings with him some rosaries (Rudraksha) to remind him of his ascetic nature.

Especially when he dances he has with him a tambourine, damaru, with which he dictates the rhythms of creation and destruction. He is called “blue throated”, due to a legend that sees him drinking all the poison in the world, emerging from the ocean to destroy the universe.

The reason why he has a snake around his neck is precisely for the purpose of tightening his throat and not allowing the poison to reach the stomach.

The trident, trishula, is perhaps the most famous and identifying symbol of Shiva: it represents the lordship over the three forms of time and on the three aspects of the Trimurti, crowning her as supreme lord. From her hair originates the goddess Ganga and the river that embodies her, the sacred Ganges.

He frequently sits on a tiger skin, representing him as a meditating yogi above animality. On the forehead he wears the tripunda, three horizontal lines to signify the secret of the three Vedic fires. Shiva’s Avatars In Shaivism, Shiva is worshiped as the Absolute Lord, and according to this theology he would sometimes have assumed human form in a series of less famous avatars than those of Vishnu.

Veerabhadra: is the form taken by Shiva during a mythological episode in which he lost control of himself by seeing the goddess Sati sacrificing herself in the fire. In this combative aspect he managed to injure numerous positive deities as well.

Bhairava: There was a time when Brahma and Vishnu were fighting for supremacy. When Brahma succeeded in prevailing, Shiva incarnated as Bhairava and cut off his head so as not to compromise the order of the universe and maintain balance.

Sharabha: it is a particularly monstrous form, two lion bodies joined in a vulture’s head, with which Shiva manages to calm Vishnu in his form of relentless destroyer.

Ashwattama: Son of the mythical Drona warrior, Ashwatta but he is in turn a warrior who takes part in the great battle of the Mahabharata. He would be an incarnation of Shiva.

Durvasa: he was an ancient sage, with a knowledge out of the ordinary for his time and thanks to which he maintained order in a world on the brink of collapse. Despite boundless knowledge, he had a short temper.

Hanuman: Perhaps the most famous of the forms of Shiva. This is the monkey god in the total service of Rama and therefore devotees of Vishnu.

Shiva in Buddhism We can also find Shiva in Buddhism, which by nature does not celebrate any god. Here it loses its absolute role and becomes, at least in some Buddhist schools, an emanation of Avalokiteshwara, bodhisatva of compassion.

In this capacity he is celebrated in the Lotus Sutra, one of the most important of all, in which Shiva appears prostrating himself in front of the Buddha asking to obtain “Buddhahood”.

We can also find Shiva somehow in Vajrayana Buddhism, of a tantric nature, in which Shiva sometimes takes on the symbolic form of the male pole of the universe.

Curiosity about Shiva Today the name of Shiva has become extremely popular, so much so that it is used in worldly environments such as video games and jetset, where we also find the young Milanese rapper Shiva, born Andrea Arrigoni.

The main sources of information on Hindu mythology are the ancient texts Vedas, Puranas and Tantras, which collect and describe the traditional stories, epics and myths about the gods of Hinduism and date, at least, to the 2nd millennium BC.

In these stories, Shiva’s story is not clear and does not have a coherent narrative thread.

For example, in the Vedas texts the name of the god Shiva does not appear, but to increase the veneration of him he was associated with the god Rudra, who does appear in the Rig-veda (the oldest text of the Vedic tradition).

In the Vedic religion, one of the oldest beliefs in India, the only deity with great destructive potential is Rudra, the god of “terrible” force, who was later identified as Shiva “the benevolent.” Both gods have the same qualities in Hindu scriptures, and are recognized as the same god by experts.

On the other hand, in the Puranas texts Shiva is referred to as Siva, Linga, Skanda, Agnim, among others. But in none of these texts or myths is the origin of him clarified, although he stands out as one of the main gods of Hinduism.

However, it is known that Shiva is part of the Trimurti or Hindu Triad, formed by the three great gods of Hinduism. Shiva represents the destroying god, Brahma the creator god and Vishnu is the preserving god. In this way, the cycle of creation, preservation and destruction is completed.

For Shiva, destruction is necessary to achieve spiritual purification. The destructive aspect of it is also associated with the idea of ​​change and transformation of life and the universe as a continuous cycle.

His home is also known to be on Mount Kailasa, an image that can be seen in the background when he is depicted doing the Mahāyogī yoga posture, and where he has lived with his wives.

Sati, goddess of marital happiness and longevity, daughter of Daksha and Prasuti, was the first wife of Shiva.

Satí was born from the reincarnation of the goddess Adi Parashakti, of whom her parents were devotees and to whom she warned that they could not mistreat her daughter because they would cause her death.

Sati married Shiva, but Daksha did not approve of the marriage. She held a party to which she invited all the gods except her daughter Satí and Shiva.

Sati insisted Shiva to go, but he did not want to. Satí went to confront her father, who yelled at him and forbade her to enter, which caused her suicide by setting her on fire.

Shiva, upon learning, was enraged to Dashka’s house, whom he killed along with thousands of innocents through the dance of destruction or his representation of Shiva Nataraja.

Finally, Shiva brought back to life all those he had killed, took the charred body of Sati and walked through the universe.

Various parts of Sati’s body fell in various places that are now considered sacred in Sri Lanka, India, Nepal and other Asian countries.

In the Hindu tradition, Shiva fulfills the function of destroying god in the Trimurti (three-forms) or Hindu Triad, composed of the gods Brahma and Vishnu.

However, he also has the ability to recreate from death which, understood from Hinduism, represents a change in the way of life and not the nonexistence as such.

As a destroying god, Shiva destroys everything that exists so that the new emerges and life and the universe are regenerated, therefore, he also considers himself a creator god.

In the field of spirituality, destruction is necessary to evolve, hence he is also considered the most important yogi or god of yoga.

Likewise, Shiva is the venerated god of Shivaism, one of the oldest and most influential beliefs of Hudaism.