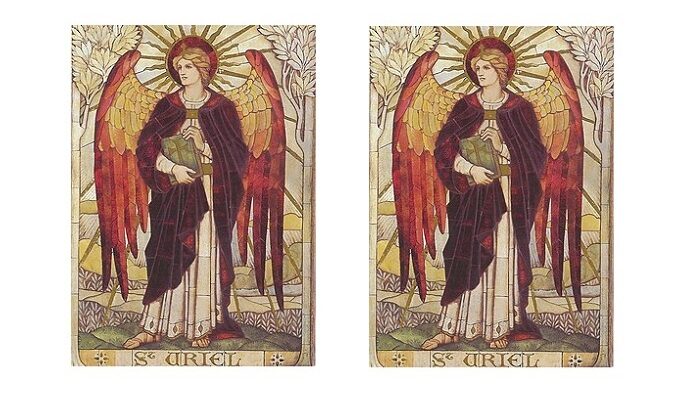 Uriel, Oriel, Muriel, Uryan, Jeremiel, Suriel, Auriel, Vretil, Puruel, Phanuel, Jehoel, Fanuel, Ramiel; are the main names by which this archangel is known. אוּרִיאֵ “God is my light” or “Fire of God.” He is accepted as an archangel by some Christian traditions, specifically the Coptic, Orthodox, and Anglican.

Also, according to rabbinic tradition, he is one of the seven archangels referring to Uriel as starlight or angel of light.

The first books of the Bible do not mention the name of angels, supposedly these names come from the Babylonian tradition according to Rabbi Ben Lakish (230-270).

The name of Uriel appears in apocryphal books such as that of Enoch, Uriel being the archangel who intercedes for humanity, in the book of Enoch seven archangels are named: Uriel, Raphael, Raguel, Miguel, Sariel, Gabriel, and Remiel…

The archangel Uriel is associated with the earth element, therefore he governs the signs of said element, that is: Taurus, Virgo and Capricorn; although anyone, regardless of his sign, can ask him for help

In the article on the archangels I explain that according to different beliefs, some consider the existence of 3, 4, 7 or 10. Usually four archangels are considered for the four elements and seven archangels in total according to many cosmogony.

If we consider seven archangels, the main signs ruled by the archangel Uriel would be Capricorn and Aquarius, and this is reflected in numerous hermetic writings, with Capricorn being the main earth sign.

Patience, confidence, perseverance are typical gifts of the fire element, along with prudence. They are usually very resistant, vital, disciplined and realistic people, with their feet on the ground and lovers of order. So we can enhance all these qualities with the help of the archangel Uriel.

People in whom the earth element predominates can have problems of lack of vision, stubbornness, squares and sometimes, in extreme moments, cynical and materialistic in excess. All these negative aspects can be balanced by working with the archangel.

Archangel (Greek. Chief of angels) – angelic hierarchy, an incorporeal spiritual winged creature belonging to the third triad and the eighth angelic order. In the text of the Holy Scriptures, the names of some archangels are named, which reflect the type of their Divine ministry.

One of them is URIEL (Hebrew light, the fire of God) – the giver of Divine love and light, designed to kindle the fire of faith in the hearts of people. Archangel Uriel is depicted with a drawn sword and a fiery flame in his hands. 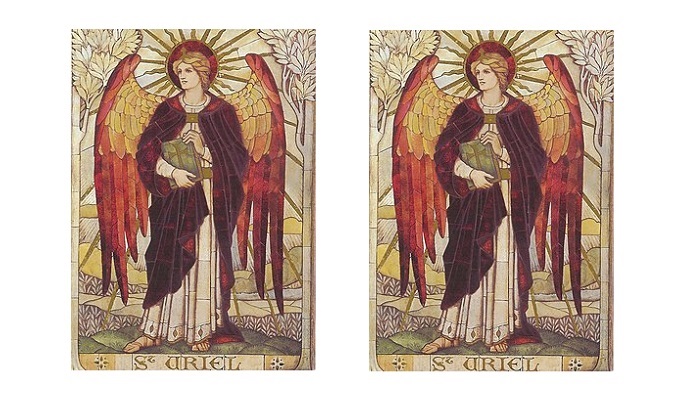 Since the 11th century, in churches, archangels are depicted in the walls of the windows of the drum, which connects the two zones of the temple – heavenly and earthly. Since the archangels carry out the connection between God and man, this architectural form was chosen for them.

Archangel Michael and Gabriel are often placed opposite each other at the entrance to the temple and at the exit from it. Archangel Michael is depicted as a winged warrior with a sword and a charter on which the words are written: “With an unclean heart flowing into this pure House of God I stretch out my sword mercilessly”, or “I am God’s governor.

I wear a sword. I ascend to the height. I frighten you with the fear of God. I will punish contemptuous “, or” I stand fully armed, and gaze meekly at the good, but I slash the evil with this sword. ”

Archangel Gabriel is presented without a sword, with a charter on which it is written: “I hold the quick-writer in hand, I will write down the thoughts of those who enter, I will keep the good, but I will punish the evil.”

The icons of the Archangels Michael and Gabriel are included in the local rite of the iconostasis of an Orthodox church.

We will select the image of the saint and calculate the cost of the icon in accordance with your wishes and possibilities. You can get acquainted with the available samples in the Catalog of Icons, and find out the preliminary price in the section – prices for icons.

The main ruler of the Seraphim and Cherubim is Archangel Uriel; whose supernatural powers are used to help man; he has an effective symbol that is used for protection.

The archangel Uriel is on the throne of God; the faithful dedicate Fridays to him to invoke his help. Archangel Uriel protector of humanity

For Archangel Uriel he is a spirit of great spiritual evolution; he is a guide within the paths of evolution and daily protector of men of good will; that is why he is considered the Angel of the Divine Presence.

He is also known as the face of god because of his great beauty. He was the one sent by God to protect Noel from the universal flood; According to the sacred writers Uriel symbolizes the almighty force of the spirit of life.

This archangel is known by various names such as: Fanuel, face of God, archangel of salvation; Metatron, Saint Uriel, well, his name is not as important as his powers; He also rules over the 6th Ray with his Golden Yellow color.

He is the brightest angel in heaven; he is considered the Archangel of Revelation. He is the one who protects human beings who are going through times of pain, persecution and tragedy.

Uriel means fire of God; within his story as Archangel he is recognized as Abraham’s guide in his travels who solved the problems that arose in his long journey.

This archangel also rules over the ninth month of the year and rules over those born under the sign Libra; He is in charge of projecting the sixth ray with its colors on the planet earth, to fill it with the grace of God and direct the current of life.

The devotees of Archangel Uriel, affirm that he has qualities to rule on earth, with powers to create much abundance, prosperity and material or spiritual wealth. He is the archangel who enlightens us; he solves problems for us when there are disputes, persecution, family disunity, conflict between couples and chaos.

Giving us spiritual peace and serenity, to accept the existing reality, without having to flee from it. He is the one who enlightens us so that effective Communication flows in work, studies, community and family.

In the case of artists, he gives them inspiration for music, painting, dance and art in general; in the same way, he guides public servants such as: doctors, judges, teachers, nurses, policemen, healers and religious; Likewise, it allows us to channel the energies of abundance in crops, money and fertility.

When we want to request the intercession of Uriel; we place his image or his figure on Fridays at 6 am or before the sun rises; we light orange, gold or yellow candles; a glass vase with Nardos flowers is placed.

Their prayers or metaphysical decrees are made using the following words: you’re purifying fire, your beloved presence, your powerful ray of light, send your legions of angels to rescue me, cover me with your wings. Finally the miracle is asked to grant.

He can help us: in school tests or exams, for body and facial rejuvenation, to release internal pressure, he teaches us to respect universal laws, activate creativity; he symbolizes the seek wisdom, he is the leader of the guardian angels.

He allows to have a vision with multiple angles; the mere presence of him creates a harmonious environment in the places you inhabit. He always listens to the requests of his faithful devotees

Generally the devotees of this archangel; they use Uriel’s golden medallion as a symbol; which has his powerful seals engraved and the words that are inserted in it are: at the extreme left ADONAY can be read; at the far right ELOHA.

At the bottom it reads. +. EIEH. +. AGLA. +. he usually he is depicted with a golden glow; large well defined wings, long golden hair, he also symbolizes divine light when he holds a great flame in his hands.

Sometimes he holds a book in his hands; it is the symbol of Uriel used by writers, journalists, thinkers, writers, poets, musical composers, and legislators, among others; in the same way it represents the Chakra corresponding to the Solar Plexus; He belongs to one of the ruling angels of the Sun.

When he holds in his right hand a flag or stick that ends in a cross; it is this figure that is used to transmute: hatred, fear, doubts, anger, anxiety and impatience.

Anyway, Uriel has an effective symbol that is used as protection.

Visions of food, transportation and medicine, good fortune, abundance and fertility. Since ancient Christianity these types of requests are made and Uriel is venerated, together with the Archangels Michael, Gabriel and Raphael; who are the main archangels who assist god on his throne; who are also the heads of the angels.

In this perfect organization, an archangel can be obeyed by a legion of angels; who are sent to transform your inner world, when the archangels are invoked; to find unlimited love, perfect health, clear the paths of octacles; in the same way they help to produce rapid positive changes in your life. When you invoke it with burning faith, you will immediately feel Uriel’s presence to transform everything that hurts you.

To communicate with the archangel Uriel, many faithful turn to prayer; where he asks for his blessing, he is thanked for favors granted.