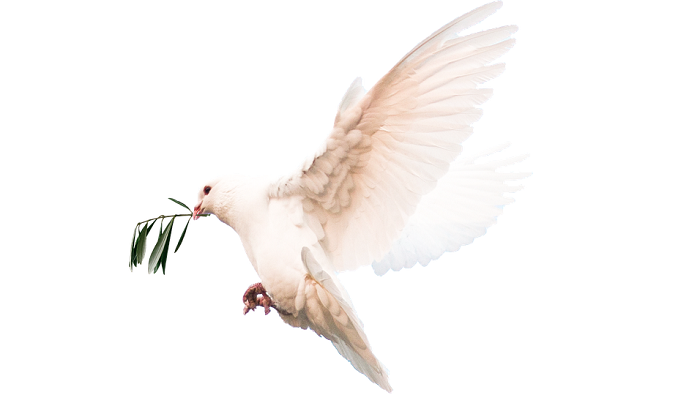 Without a doubt, the most widespread symbol of peace is that of a white dove with an olive branch in its beak. This icon comes from Genesis, the first book of the Bible.

The story goes that, after the “universal flood” that flooded the planet, Noah released a dove to see if the water level had dropped and if, again, all the species that he had saved could live on dry land.

On his return, the dove brought an olive branch, proof that it was possible, after the tragedy, to live in peace with God and nature.

In its reelection campaign, the government of Juan Manuel Santos used the dove of peace to defend the negotiation process it is holding with the FARC in Havana. The pin that Santos himself and his entire team carry with them since then is likened to those worn by beauty product promoters.

The dove of peace, like the doves of the Plaza de Bolívar, multiplies on web pages, television programs, events and others. All with the aim of promoting consensus and acceptance of post-conflict agreements.

But Santos forgets why the dove of peace carries an olive branch. In the Colombian case, the olive tree can be replaced by corn, yucca, banana, potato, pea, tomato, onion, lettuce, guacos, or any other product that peasant hands grow and that constitute the basis of our diet daily.

The olive tree, biblical proof that there was land, signifies the end of the flood, of tragedy, a new opportunity, the resurgence of life, a new world.

Thus, the earth constitutes the fundamental component of a new world, of peace; even more so in Colombia, a country plagued by violence, where the dispute over land has been the cause of the armed conflict: more than 7 million displaced, more than 6 million hectares dispossessed, and the greatest inequality in the distribution of the earth.

Official figures say that, in our country, the GINI index – which measures inequality in the distribution of land – is higher than 83%, one of the highest in the world. In other words, very few concentrate the greatest amount of land, while many are without it.

This is worrying in a country where a large part of the population is peasant, for whom land is a vital and urgent need.

The agrarian issue was the first point of discussion at the peace negotiation table [1]. In this agreement, a comprehensive rural reform was agreed, which seeks to create conditions of well-being and good living for the rural population, the reduction of poverty and the reactivation of the countryside, especially of the family economy. 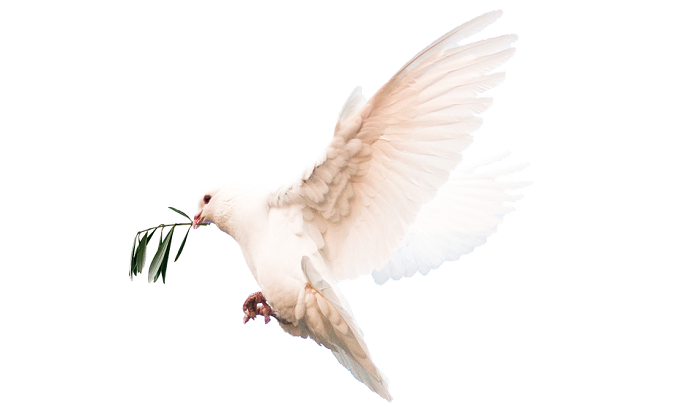 The basis of rural reform is the land fund, which has the purpose of achieving democratization and free distribution of land in favor of the most vulnerable families and communities.

Peace depends on it, that the landless peasant families, who have always suffered poverty, marginalization and violence in the countryside, as well as the peasant families of the militants of the armed groups that are part of the conflict, have access to lands, to a piece of territory that allows them a dignified, free and happy life.

There is no paradise. Santos forgets that without land the dove would not have returned with the olive branch in its beak after the flood that it would have died trying, drowned, hopeless.

Santos is forgetting this when promoting laws such as the National Development Plan 2014-2018 and the one that creates the Zones of Interest of Economic and Social Development – ZIDRES [3], with which he distributes the land that is needed for peace to companies, mining, energy, infrastructure and agro-industrial multinationals.

Land is a finite resource. Colombia has an area of ​​114 million hectares, of which almost 37 million are indigenous and black population, 14 and a half million are national natural parks, 3 million are wetlands, 41 million are rounds around mining exploitation areas and hydrocarbons, 48 ​​million are from forest reserves, 38 million are in extensive cattle ranching … and only 5 or 6 million are for agricultural use, including crops such as palm and sugar cane.

That is, less than 5% of the national territory is worked by peasant hands. Laws such as ZIDRES take properties that would be used for the Land for Peace Fund and hand them over to entrepreneurs for the implementation of large-scale, technician monocultures, which discard peasant work and displace family agricultural food production.

If Santos does not prioritize the implementation of the comprehensive agrarian reform that the post-conflict requires, due to the commitments he has with other interests, all of us who do bet on the peace necessary to overcome the tragedy or continue to kill ourselves, we must continue to exercise harsh control and denounce the policies and laws that go against peasant rights, which, ultimately, take the olive tree from the dove.

Traditionally, the dove of peace carries an olive branch in its beak and it is white, but we invite you to paint with your class doves of all colors in this activity for Early Childhood Education and the first cycle of Primary: Colors of peace.

The lines within the circle represent the letters D and N (nuclear disarmament) in the semaphore alphabet, which is the one used by arms and flags to send long-distance visual messages.

This may be the most special symbol for your classroom, because it will be your creation. Discover how to create a vaccine of good treatment to protect your environment from violence.

The special thing about this vaccine is that together you can discover what forms of violence affect you and generate solutions and commitments to stop them. This vaccine is not taken, it is thought!

Among their traditions, the native peoples of North America share a ceremonial pipe as a symbol of peace and friendship between groups and between people.

These pipes have different shapes, materials and names throughout the American continent (chanunpa for the Lakota or bahui for the Shoshone). Later the Europeans generically called these pipes with the French word calumet.

The broken rifle has been used as a symbol of peace since the beginning of the 20th century, when different European pacifist organizations used it in their protests against the First World War. In 1921, the International Network of War Resisters adopted it as their logo.

Other symbols related to this idea are the image of a rifle or pistol with a flower in the muzzle, destroyed tanks or a disabled weapon, like the one in the photo, the work of Carl Fredik Reutersward.

The rainbow is a very widespread symbol of peace. In 1961, Italian activist Aldo Capitini used a rainbow flag for a peace march and the symbol became popular.

Currently, the flag of peace has the seven colors of the rainbow upside down (purple above and red below), as opposed to the multicolored flag of the LGBTQI movement (six colors, with red above and purple below).

In the world there are conflicts over water, but water can also be a source of peace. Learn in the classroom about this topic

Also known as the Roerich symbol or the symbol of the Roerich Pact by its author, Nicholas Roerich, a Russian artist and philosopher who dedicated part of his life to promoting the protection of art, culture, education and science in times of war and whose influence has been very important in the development of laws and agreements for the protection of cultural heritage.

It is said that, during the First World War in Europe, many poppies grew in what had been the battlefields, so this flower was adopted as a souvenir of those who fell in the war.

Later, the white poppy was promoted as a symbol of pacifism, non-violence and against the disasters of war.

Union of the word peace in the Hebrew (shalom) and Arabic (Salam) languages ​​as a vindication of peace and concord among the people, peoples, ideologies and religions in the Middle East.

The flat painted hands and outstretched showing the palm are a gesture of peace and rejection of violence, particularly terrorism.

The symbolism is twofold: that they are painted white reflects opposition to hands stained with blood, which reflect violence;

The fact that they are open and extended in front is a gesture of self-affirmation, of conciliation and that communicates that the person does not hide anything, unlike a fist, which he can hit and hide.

Did you know these symbols and their origin? Images, symbols and gestures help us to give visibility to complex issues, such as peace, non-violence and good treatment, but they are not effective if we do not implement them.

Use them in classroom activities or for mobilization campaigns in your educational center. Do not forget to explain its origin, because its value is not in its form but in its meaning.

And, if you dare, you can draw landscapes of peace in the classroom, because no symbol is as powerful as those with which we are committed.

The dove of peace is a very ancient symbol. It appears in the book of Genesis and represents peace and reconciliation after the universal flood.

After the Second World War, the dove of peace was once again a highly recognized image, due to some drawings made by Picasso.