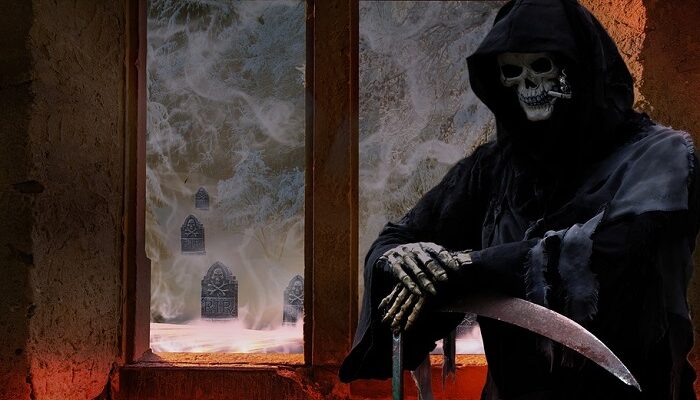 People fear many things. Some of those fears are rational and can be understood.

At the same time, others are doubtful to happen and even hard to imagine.

Every person is unique, and that uniqueness often is followed by some peculiar customs, behavior, and anticipations. But there is one thing that most people share, and that’s fear of death.

Death is a normal part of the life cycle and something inevitable. Many wanted to find something, a potion, a spell, a recipe, for immortality throughout history. But that is impossible.

There is no recipe, no potion, or a spell that can help anyone escape death. And because of that, people are scared of death.

Of course, some are not scared, and those that don’t think about it. Due to death’s uncertainty, most people can’t say that death doesn’t scare them. It is because no one knows what’s next or if there is something next.

Are we going to reincarnate, go to Hell or Heaven? Are we eternally going to be lost, or we just stop existing? There are so many questions, but no one to answer them.

Because no one ever survived death and came back to life to share their experience. People are slaves of habits, and most love to plan, and can’t live with the suspense, so the idea of death scares them to a great extent.

In contrast to fear, death was always an exciting topic for many, so today, we have many artworks, stories, and books with death as a leading role.

Because death was something, we couldn’t put our thought around because we never saw it, we needed a personification of it. And that’s when the Grim Reaper comes into the story.

In most mythologies, literature, and art, death is represented as Grim Reaper, a skeleton dressed in black rags with a scythe. It comes to collect the soul of the person and to cause their death.

Grim Reaper is not a pleasant sight, and not many loves to see it anywhere near them because, in modern history, it represents death itself. So, what does it mean to dream about it? How is it possible to dream about something so unpleasant? And what does it signify? Is it a bad omen? Is something disturbing going to happen if you have dreams about Grim Reaper? 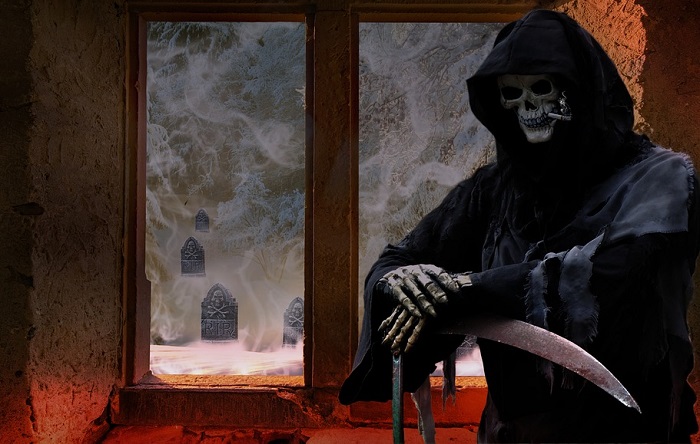 In this article’s upcoming lines, we will talk more about the symbolism behind the Grim Reaper, what it means to dream about it, and whether something terrible or even good happens as a product of these dreams?

Before we begin the story about this topic, we would like to encourage you to write down all your dreams in a handy little notebook.

The meaning of death in dreams

Believe it or not, although it is a symbol that many fears, death is a common symbol that occurs in dreams. People who experience the Grim Reaper’s appearances don’t think about them as dreams, instead of as nightmares.

Mostly, the Grim Reaper’s appearance is so disturbing that many wake up in the middle of the night. And some are even afraid to sleep, fearing they will meet the Grim Reaper again. And that’s normal because no one wants to experience horror while they are sleeping.

What can it be? Why are you having dreams like this?

If you had a close death experience in the near past, maybe you are just reexperiencing it. It can be that you’ve had an accident or something similar, and you were close to dying, but you didn’t. Or someone close to you died, and now your conscious is thinking about that situation.

In both situations, it’s normal to have dreams about death and the Grim Reaper because your brain is trying to deal with something new and unpleasant. Rather than that, there are no other meanings behind those dreams.

If you did experience nothing similar, then something else is the reason for your dreams, and in most cases, it’s not a good sign.

Sometimes you’ve been introduced to death because something is about to end in your life. It can be a phase, a relationship, a job, or anything else that’s important to you.

Also, it can be that you have a person in your close circle that’s full of negative energy, and it’s transferring that energy to you. Your subconsciousness is trying to warn you, and it would be best if you could recognize that person and eliminate it from your life.

Now we will share some of the potential scenarios that might’ve happened in your dreams with the Grim Reaper in a leading role.

You saw the Grim Reaper

If you just saw death and didn’t interact with it, it could be that someone is trying to take over control over your life. Someone is watching you and trying to monitor your every move.

Grim Reaper as a human

If you’ve dreamt about death, but it wasn’t a skeleton, rather a human, it’s a good thing. It symbolizes a tight connection you have with a friend and the love they have for you. It means that they are ready to help you no matter what and make a sacrifice for you.

Grim Reaper gave you an advice

No one should take advice from death, so a dream like that is often a sign of caution. Something like that can signify a potential health problem that’s ongoing or will happen. The best would be to do a checkup to be sure everything is okay.

You were talking to the Grim Reaper

You shouldn’t take advice from the Grim Reaper, but it’s okay to talk to him in your dreams. Having a conversation with the personification of death is a sign that you are finally going to get to an agreement with someone that’s not good to you.

The Grim Reaper has spared you

A vision like this is also a warning sign about health issues. But in this case, you will be lucky because you will overcome every problem with ease.

You saw the Grim Reaper, and you weren’t scared

Another good sign is when you see the Grim Reaper but feel no fear. You will be triumphant in some area of your life, and you will be able to overcome any barrier in front of you.

If you wanted to change something regarding your work, do it because this is also a sign of good fortune and prosperity.

You saw the Grim Reaper, and you were scared

A dream like this is the total opposite of the previous one. It is a sign of unproductivity, dullness, and a period without any success.

You escaped from the Grim Reaper

Maybe you thought that it’s a good sign if you’ve managed to escape the claws of the Grim Reaper, and you were right.

It’s a sign of finally making amends towards someone you wronged. And after you do it, you will feel pleased and more relaxed.

You were waiting for the Grim Reaper

Waiting for death doesn’t seem reasonable, but in the dreamland, it is a good sign.

It a symbol of your courage, and in most cases, it’s related to business. You are finally ready to begin the business adventure that you’ve always wanted.

Is it possible to kill death? Well, in the dreamland, everything is possible.

Dreaming about killing death itself is always a superb sign. You will be utterly successful in your future endeavors, and you will overcome every obstacle you face. You have a chance to kill your competition.

The Grim Reaper brought death to you

If you were in a situation where you were aware of the Grim Reaper and the fact that he was bringing death to you and did not do anything, it’s not a good sign. You need to start looking at the world and your life more positively and stop agonizing about things that are out of your power.

Even if it doesn’t look like it, this is another work-related dream. If you’ve observed how the Grim Reaper is taking someone else’s life, it can be that you are going to experience some stagnation in your work. And that your colleagues are going to be more successful than you.

You were the Grim Reaper

If you had dreams like this, you need to rethink your life. It’s a sign of your tendencies to interfere with other people’s lives. It’s about the people from your close circle, like your family member, partner, or even your children.

But sometimes, it’s about people that are not close to you, and that’s even worse. You need to learn that you have your own life and that you can’t interfere with other people’s lives.

The moment you start focusing on yourself rather than on others, you will be happier, leading to a more quality life. Nobody likes to be controlled, so you should stop controlling others.

The Grim Reaper was laughing at you

When the Grim Reaper is laughing at you, or he is just laughing, a dream like this is a bad omen. It’s often a warning sign directed to inform you that someone is about to betray you. It could be that a business partner will do something that will hurt you and your business.

It can also be that your romantic partner will do something that will make you look like a fool. Considering all of that, you should be alerted and prepared.

You kissed the Grim Reaper

A dream like this is quite peculiar, but it signifies a possibility that someone close to you is going to be sick.

Also, it can be a good sign and an omen that you will inherit a property that’s not small at all.