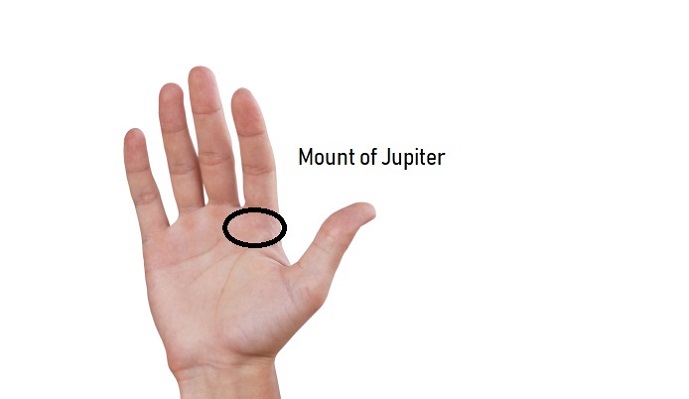 Are you interested in knowing if a person is authoritarian by nature? If you have a high or low self-esteem? You can discover all this and more with palmistry and the Mount of Jupiter from the palm of his hand.

In addition to determining the personality of individuals, there are certain types of mountains and marks that will also indicate the difficulties that will arise and, depending on the action, whether or not it will be able to overcome.

So read on to find out about the characteristics that each Mount of Jupiter can have.

Jupiter is known as “the protector” or “the beneficiary” and, because of this, his Mount is related to honor, success, human ambition and, especially, his social aspect.

In addition, it is related to the liver because all the energies that emanate from your body arise from there.

Depending on some characteristics of this, you can determine the behavior of each individual with the situations that may arise in life.

For example, if the mountain is elongated, you are facing an authoritarian and ambitious person; if he is wide, he is a generous and sociable person; and if it extends across the width of the palm of the hand, it will be very self-confident.

The Mount of Jupiter can be located just below the index finger. Depending on the characteristics you have, you can be in front of a strong, proud, ambitious, impetuous, patient or even very superstitious person.

Depending on the physical characteristics that the Mount of Jupiter presents, the personality of each individual will be different, as well as the condition and determination of him to face certain circumstances that arise in life.

With a normal Mount of Jupiter, you will be facing a noble person, of good character and, since he likes to live comfortably and with wealth, he tries his best to get what he wants.

In addition, he is very optimistic and therefore always has very good luck in the love environment.

In the event that the Mount of Jupiter is sunk, this individual is lazy and selfish because he only thinks and seeks for himself. He can be vulgar and has no appreciation for religion.

If this is very pronounced, this person can be very tyrannical, becoming a total tyrant. This is because the ambition that almost runs through his veins and the only thing he thinks about is having power, regardless of the actions or consequences that may occur in the process.

But, as ironic as it may be, they have a flaw, they are usually very superstitious and this could create illusions of things that are not really happening.

In the event that this Mount leans to the side of the Mount of Saturn, you meet an individual who is very self-confident. Because of this, she is usually trusting of others.

Not only can the physical aspects of size and characteristics determine the personality and fortune of a person.

In fact, regardless of the type of Mount of Jupiter that each individual has, their destiny can also be determined with respect to some marks that they may have on it and we will tell you what they are and what each one means.

As for the star on Jupiter Mount, it indicates the great success that the person will have throughout his life. In fact, he will be able to achieve very easily and quickly all the goals that he sets for himself, without much effort or great feats.

In the event that a square on a Jupiter Mount, this individual will always carry whatever circumstances are presented to him with great diplomacy.

Also, as long as the line of the head of his palm is straight and long, he will have a lot of prestige and success throughout his life.

If you come across a line on the Mount of Jupiter that starts from the life line, this person will be very lucky.

In fact, if there are two or more lines, they will determine how great the success will be during his life.

If you find a single point on this Mount, it will indicate that the individual will have problems of an economic nature.

It certainly won’t last forever, but this incident can completely change the circumstances of his life, according to the decisions he makes.

Palmistry and horoscope: That is Manfred Magg’s specialty. The DAV-certified astrologer and Waldorf teacher lives in Aichwald near Stuttgart and offers a combination of astrology and chirology in his consulting practice.

He explains how this works at the DAV Congress in Bonn (October 3rd – 5th, 2014). As a speaker, he presents the extraordinary life of the US pilot Amelia Earhart and describes what hands and horoscope reveal about the flight pioneer, who in 1932 was the first woman to cross the Atlantic alone in an airplane.

He summarized his extensive studies in the book “Hand and Horoscope – what connects palmistry with astrology”. In this interview you can read how Manfred Magg goes about his work – and what the hands and the horoscope reveal about the Nobel laureate in physics, Albert Einstein.

I always start with my hands first, because there I see without a doubt what is. A person’s hands can reveal a lot about their character and properties.

In the second step, I then compare my observations with the knowledge I gain from the Radix. In the vast majority of cases there are significant parallels between the two disciplines.

A long, strong index finger clearly indicates an overwhelming Jupiter influence. This can manifest itself in very different ways in the horoscope: as an ascendant in Sagittarius as Sagittarius-Sun, as a strong emphasis on the 9th house or even through a prominently placed Jupiter, for example through its position on one of the axes.

For me, palmistry is not just about interpreting the lines of the hand. Gestures, hand shapes and finger shapes also provide extensive information. How do people move, how do they move their hands? Also very interesting are the fine papillary ridges, those characteristic lines of the skin that become visible on fingerprints.

While the hand lines can change, the papillary ridges do not change, which is why fingerprints are also used to determine a person’s identity.

If you have a more intellectual-aesthetic person in front of you, you would expect that the papillary ridges are also much finer, but also clearly drawn through and not dotted.

As a rule, in Europe we look at both hands and focus on the right hand, at least if it is a right-handed person. The left hand gives information about our “dowry”, that is, about our investments and our starting position in life, while the right hand shows what we have made of our “luggage”.

As a rule, you have fewer lines in your active hand, this is where the forces are concentrated. The lines of both hands change in the course of life: some lines disappear, others can be added.

The thumb also plays a major role. It decides with the thumb what a person can do with his investments, how well he is able to realize his talents and abilities. The thumb corresponds most closely to the solar energy in the horoscope, in conjunction with the Mars potential.

When I first saw Einstein’s hand, I was very surprised. I thought this was a much more intellectual guy than showing his hands.

Above all, you can see a strong emphasis on the moon: the right hand has a pronounced, strongly rounded moon mountain. The head line does not go straight through what one would expect in a very rational person, but it falls under the middle finger – the Saturn finger – and ends in the moon mountain.

So here we see that Einstein’s superior mind was directly linked to a strong intuition. Astrologically we find this again in the water emphasis of the horoscope, in its Pisces-Sun and its Cancer ascendant.

Einstein was also a very helpful man with all of his epistemology. He provided asylum to hundreds of people who had fled the Nazis in the United States.

The ring finger line draws a long line down to the moon mountain in the right hand. The ring finger line is actually a secondary line that is usually not as strong. If it is as long as Einstein’s, that speaks for a clear, special talent. He even has two or three lines running in parallel!

And there’s one more thing: When the ring finger line rises from the very bottom of the moon mountain, it has a connection to Uranus, which of course is related to unconventional thinking and ingenuity.

The moon mountain suggests that Einstein with his extraordinary talent also had the potential to be popular and to be recognized by the audience, because the moon always represents the audience.

Even as a child he was not always the most hardworking, even lecturers sometimes complained about it. His clothes were messy and his wife sometimes combed him because otherwise he would have forgotten. He even gave a speech once, wearing a sock only on one foot, the other being naked in the shoe.

I associate all of this with his pronounced moon mountain, which shows a tendency towards comfort, towards phlegm, which in turn corresponds to its water emphasis in the horoscope.

Friends reported that he had excellent concentration and was able to occupy himself with a problem for a long time. With that he has certainly compensated for a lot. The Cancer ascendant already symbolizes a certain spiritual abundance.

But Mars is elevated in Capricorn in the 7th house. This Mars rules over Einstein’s Saturn-Mercury conjunction in Aries and in the 10th house, and Saturn in turn rules Mars – a very powerful reception. In Einstein we find the moon-like moody as well as the mentally clearly structured.

At first glance you can see that the middle finger of Einstein’s right hand is very upright – people then have pronounced structural strength. Fingers always stand for spirit and imagination, the palm more for the mental and physical.

In Einstein’s left hand, on the other hand, there is the emphasis on Mercury, which is shown in a pronounced little finger. One speaks of a strongly placed Mercury in the hand when the little finger is particularly long – i.e. protrudes over the top crease of the ring finger – and that is the case here.

By having the mark of a grating from the mount of Jupiter, near the base of the index finger, this person will achieve success, but this will not be easy to achieve.

There will constantly be obstacles, difficulties and obstacles that the individual must overcome, to such a level that it can become totally frustrating and can cause the person to choose to throw in the towel.