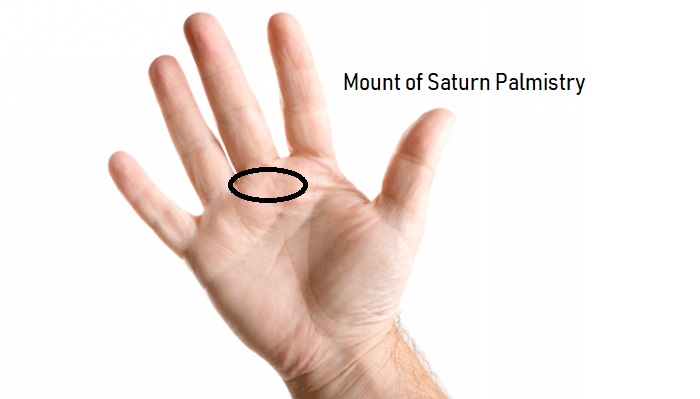 A person is curious, wants to know the events of the future, palmistry gives hints on the hand.

Among the bumps of the palm, the hill of Saturn occupies an important place. Together with the hill of Jupiter, they influence aspects of human destiny.

The mound is located under the middle finger, at the base. Reveals the subtleties of character: enterprise, insight, wisdom. People are sociable or withdrawn.

The size of the elevation is important for revealing the qualities, actions of people, palmistry takes into account the location in the palm of your hand.

After all, the hill of Saturn, like a wandering star, is shifting – it may be under the ring or index finger.

Not always visible. The presence of a hole instead of a hillock tends to see the owner’s uninteresting life. Joy will be a rare guest. Weak-tempered, insecure, often mistaken, trusting people.

The owners of the flat surface characterize the good-natured, conscientious owner of the hillock, with an independent disposition. Life, like a calm river, runs unnoticed.

A dense, regular hill speaks of a person’s wisdom, caution in actions, balanced decisions. A stay-at-home, avoids noisy companies. Does not create a marriage for a long time, is faithful to the family.

The work is successful, copes with difficult areas. Patient, assiduous. But palmistry warns against gambling, since persistence in achieving a goal leads to ruin due to the desire to win.

Palmistry explains the overly developed hill of Saturn not in favor of the owner – good qualities turn into negative ones. Merry fellows become prone to depressive states, commit suicide.

The hill on the hand can be found under the finger of the mound of Jupiter. Characterizes a decisive optimist, inclined to empathize, listening to people who have suffered grief, troubles. Sliding to the Apollo site, gives the owner philosophical inclinations, creative research.

To see the mound of Saturn at the line of the heart of the palm – palmistry interprets it as an unrequited love of the owner, thoughts about it enslave the consciousness. She hatches a plan for revenge, instead of freeing a corner of her heart for a new feeling. Close to complete loneliness.

At the moment, it is considered one of the oldest ways to tell about a person, his past and future. Thanks to palmistry, you can learn about the unique features, traits of a person’s character, the presence of which sometimes he himself does not know.

The palmist, just by looking at the relief of your hand, can tell about what was in your life, what occupation will bring the greatest income and what to expect from family life. Symbols are also of great importance.

Despite the fact that science puts palmistry on a par with astrology and occult teachings, there are now several universities and academies in the world teaching palmistry.

Hills in palmistry are called bumps on the palms. Each bulge carries information about a person’s life and is responsible for a specific area. You can see the hills on your hand if you open your palm, straightening your fingers.

They will be located at the base of the fingers. It depends on whether they are obvious or, conversely, even, what kind of virtue or vice a person has, what kind of inclinations and character traits a person has.

Mount of Venus. The bulge is located at the base of the thumb and is responsible for a person’s ambitious thoughts and his future on the love front, the happiness of the owner. It can also say about temperament and willpower.

One of the delicate elements that this element of the palm of the hand can highlight is if the person tends to have a sad mood, even reaching depression. Which can be a very delicate aspect, because the person can become suicidal.

The Mount of Saturn is located at the base of the middle finger, also called the middle finger. This expresses how the personality is from its temperance and seriousness that it takes before the various circumstances of life.

As well as if he is a shy person or not, if he has tendencies to depression and if he is a prudent person.

In addition, this sector of the hand is related to the spleen. In addition, the destiny of the people ends in this mountain and that is why the line next to it is called the Line of Destiny or Saturn.

Depending on the shape of the Mount of Saturn in the palm of your hand, it will be possible to decipher what that person’s personality is like and what his future will be. Read on to find out how they can be presented.

If the Mount of Saturn is not prominent or sunken, but has normal characteristics, you are facing a calm person, who will have a good life and success, as long as he has made an effort for it.

In addition, he knows how to adapt to changes and act well in the face of difficulties with great skill and firmness.

Faced with a sunken Mount, it is presaged that the individual will have a fairly simple and very routine life. However, at some points in that routine, you will encounter difficulties.

In the case that the Mount of Saturn is more bulky than the average, the personality of this person is introverted and excessively detached both to objects and to other people. Because of this, they have a very great discipline, which can be excessive and they are very stubborn and proud.

But, if the Mount is exaggeratedly prominent, this individual is very bitter and pessimistic to the extreme. Unfortunately, it can be very worrying because he is likely to be suicidal. On the other hand, he may have problems with blood circulation and rheumatism.

If you have the Mount of Saturn sliding towards the Mount of the Sun, you will be before an artist by nature. In fact, this person will develop like a fish in water in artistic themes, this being the only real profession he should have.

Not only the shape of the Mount of Saturn determines the personality and destiny of the people, also in this they can present marks or signs that indicate other aspects with which each individual will live during his life. Find out what these are.

Depending on how the mark of the cross is presented on the Mount of Saturn, it will have a particular meaning.

In the case of being this large mark, it indicates that the person will die from an accident. In addition, he points out that there will be difficulties and miseries throughout his life.

But, in the case that a small cross appears under the union of the finger, it indicates that the individual will enjoy a great spirituality.

If a star is presented, it will be the harbinger that a disgrace will occur during the life of the person or that there will be a scandal of a social nature.

This indicator speaks of a person’s tendency to change places of work, residence, friends, to jump from one case to another, not to bring anything to its logical conclusion.

The result is usually a complete fiasco. Although this line as such is not the cause of life’s failures, it is found in the hands of many people who have suffered these failures.

Such people either turn into bad Saturnine, or run from one place to another until life finally breaks their will to resist.

If Upper Mars is underdeveloped, the thumb is small and the Mercury line has defects, the person either goes crazy or commits suicide.

Sluggish hands, a fuzzy Mind line, a weak thumb, undeveloped mountains of Mars, or a large mountain of the Moon make a bad combination with the ring of Saturn.

If, in the presence of the ring of Saturn, the line of Mind descends to the mountain of the Moon, which is also covered with transverse lines and highly developed, a person is endowed with an extremely rich imagination, changeable, unstable and unable to achieve anything definite.

This can often mean a disastrous retirement. The broken line of the Mind enhances the fickle character of the owner of the ring of Saturn.

A similar combination has a negative impact on the Apollo line. The Lunarian, as the most volatile of all types, is the most influenced by the qualities of the ring of Saturn

If Saturn’s ring is broken, its properties are not as destructive.

Are you dealing with an introvert or an extrovert? Will she have a strong character or will she be shy?

Will she be lonely or will she have tendencies toward depression?

All these questions can be answered by the Mount of Saturn in the palm of your hand.

From the form you have this to various brands can predict how strong an individual’s personality will be, if it will be successful and even the level of spirituality of it.

Read on to find out what awaits each person according to the mount of Saturn.