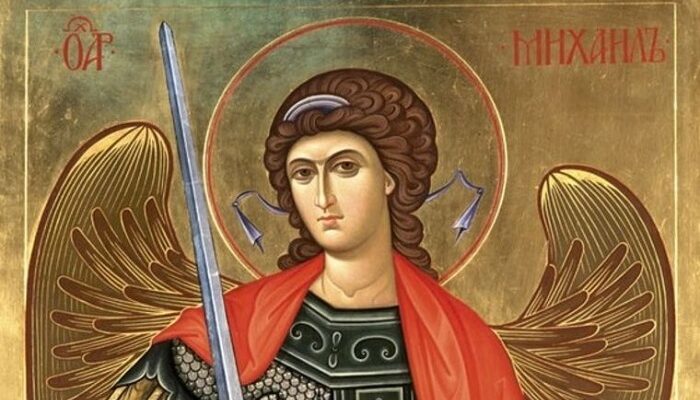 Archangel Michael is the most important Archangel among all the Angels and one of the seven archangels. He usually carries a sword that is used to free us from all evil. He is considered the representative of the force and has the power to fight the most difficult battles.

Next we are going to teach you everything you need to know Archangel Michael in depth.

The name attributed to this Archangel is “Who is like God.” In the sacred scriptures he is known as the leader of all the Angels.

He is head of the heavenly army in the Jewish, Islamic and Christian religions.

According to the Bible he will blow the trumpet on the day of the rapture or final judgment. His name is widely mentioned in both the Old and New Testaments.

If at any point in your life you feel fear for yourself or someone you love, you can make the following invocation and this Archangel will help you. “Beloved Archangel Michael, wrap me with the blue ray of your sword of light, I thank you, loving Archangel.”

The moment you make the request, visualize that you are wrapped in that ray of light. It is a quick invocation that you can do from faith to help you calm your soul and obtain the protection of this heavenly Archangel.

If you do it with faith, you will notice an immediate tranquility. You can use a special candle to summon him.

Within the tarot of the Angels, the Archangel Zadquiel card tells us about the cleansing of karma and forgetting mistakes made in the past.

The consultant must feel free to rebuild his life and start from scratch. This Archangel is the Angel of truth, annunciation and mercy. He is the one who is close to man and to the left of God.

He is the Archangel of aspirations, love, hope and nature. He is considered the prince of the Angels. He takes care of our relationships with the other Angels. 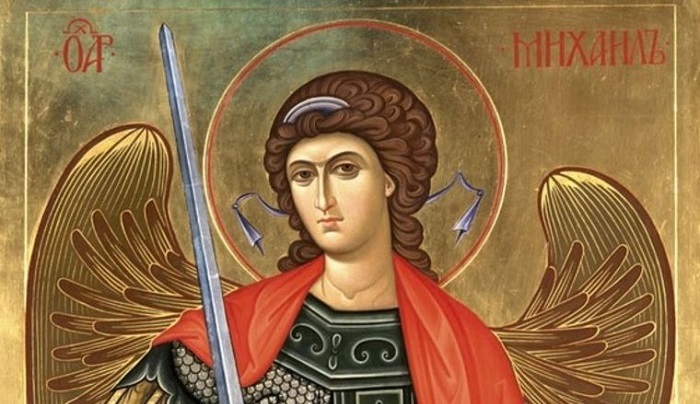 In everyday iconography, Saint Michael appears victorious against the devil who falls at his feet before his sword. In this way, good is positioned above evil.

If you want to have a picture of the archangel Michael visit our online store. The color associated with Archangel Michael is blue. The blue color represents the power of the spirit, the mythical and the intuition.

The symbol or seal of the Archangel is a sign of high protection. The seal protects and cleanses the light channel of the being.

Anchor in us the sword and give us strength. This seal brings into our being the celestial energy and the vibrations of the Archangel. Clean and protect all physical places.

The seal cleanses and transmutes all the memories of the soul and releases bad vibrations to heal the spirit.

The Archangel reminds us of the Holy Trinity. He reminds us that we are the children of God we are here to anchor the light on the earth. He gives us faith and trust in God and the Universe.

This Archangel corresponds to the sacred code number 613. The associated mineral is sodalite.

Sodalite stimulates the third eye so it is very useful when meditating or harmonizing the vibratory energy of the body. In our esoteric online store you can find San Miguel mineral bracelets.

Archangel Michael is associated with the throat chakra. This chakra is the center of communication, will, integrity, and trust. On a physical level he rules the thyroid, throat and neck.

To invoke it, use the blue candle for justice and the red candle for strength. Find a place where you can be calm and uninterrupted to do this meditation.

Sit comfortably with your back straight and both feet flat on the ground, and light some incense. You can close your eyes if you feel comfortable.

Breathe deeply and feel your body and spirit relax. From the depths of your being, ask Archangel Michael to be surrounded by his light and feel how his power surrounds you.

Imagine a circle of blue light that protects you. Breathe gently and feel the protection of heaven in your being.

As you breathe, the light enters every cell of your being. Feel how this light comes from the same sky. The ray of blue light enters your chest, feel it.

From your heart connect with the expected and the deepest feelings of compassion and forgiveness. Feel your chest expand.

Ask the Archangel Michael to bring you all the protection and divine light. Remain breathing in the column of light for 15 minutes.

After this time you return to your waking state of consciousness. Take three deep breaths and feel yourself return to the present. Do this meditation to renew your energies and ask for divine help.

The old saying “Michel ignites the light” indicates that in the past, artificial light was used from the day of remembrance of the Archangel Michael, and that until Candlemas.

And – because our ancestors could have a party for every occasion – the Monday after Michaelis was called Lichtbratlmontag.

Because before the first day of work in artificial light there was a feast, e.g. B. a turkey (= cobbler). September 29th is today the common day of remembrance of the Archangels Michael, Gabriel and Rafael, who are named in the Bible.

They have been venerated since the 4th century and – since the calendar reform after the Second Vatican Council – celebrated in a separate festival on September 29th. Originally this day was the consecration of the Church of Saint Michael in Rome.

The German word angel corresponds to the Latin angelus and denotes the messengers of God. The Bible describes them as men who prove themselves to be messengers of God (Gen 18) and as shining apparitions (Lk 2, 9).

The Bible mentions only four angels by name: Michael, Gabriel and Rafael. A fourth is a “fallen” angel: Satan or the devil called himself Lucifer.

The three archangels known by name in the Bible all have the syllable “El”, which means God, in their Hebrew names.

In order to clarify this relationship, to express that no angel is even conceivable without a relationship to God, let alone namable, one should actually write the names in German as follows: Micha-El, Gabri-El, Rafa-El.

The Angel’s Bridge over the Tiber leads to Castel Sant’Angelo in Rome, which was created from the ancient tomb of Emperor Hadrian. Archive: Manfred Becker-Huberti

More recently, angels seem to be becoming popular again – after they were not mentioned at all at times – if this is measured by the increasing number of book titles on the subject or by demoscopic surveys: After all, every second German believes, according to a Forsa survey from 1995, that he has a personal guardian angel;

55 percent of those surveyed consider angels to be a religious symbol, 35 percent are sure that angels really exist. Angels were not an issue in the art of the past few decades;

In the last few centuries they had degenerated into chubby winged heads in the visual arts. In Christian art, however, they have been depicted from the beginning, almost always with wings since the 4th century, in order to distinguish them from people and to identify them as spiritual beings.

As spiritual beings, angels live in transcendence, are oriented towards God, serve him and praise him (cf. the iconographic motifs of the praise of angels, angels making music, the angel choirs …). Just as angels point the shepherds to the manger in the narrative of the birth, they have an auxiliary and protective function (“guardian angel”) for people.

In literature, but above all in art, the presence of angels can make the word of God behind them visible, i.e. through the immanent angels the transcendence becomes visible. The visible angels symbolize the invisible, the physically visible attest to the spiritually invisible.

This is also the Hebrew meaning of his name. The Old Testament knows Michael as one of the highest angels, the heavenly prince of Israel, who stands by this people; the New Testament knows him as an archangel who fights against the devil (Jud 9, taken from Jewish legend, and Apk 12,7f.).

The extra-biblical representations have richly adorned Michael: In Old Testament times as one of the six or seven prince angels, the special confidante of God who keeps the keys of heaven, chief commander of the angels.

In New Testament times: as divine commissioners for tasks that require special strength, as intercessors of people with God, as angels of the Christian people, as supporters of the dying who lead the souls of the deceased to heaven. The latter is related to the frequent St. Michael patron saint of cemetery chapels and the depiction of Michael with a “balance of the soul”.

Because of his ability to defend himself, Michael was chosen as patron of castle chapels. It is not without reason that the Catholic Office in Berlin invites representatives from politics and the church to a “Michael Reception” every year.

A very special relationship: Ludwig the Pious (813–840), son of Charlemagne, deliberately set the Memorial Day for Michael on September 29th (Mainz Synod 813), which was remembered by the Teutons Wotans.

Michael became the much venerated patron of the Germans – and thus the role model of the “German Michel”. It was not until the French Revolution that the “German Michel” became a figure of mockery: a pointed, loyal, naive night specter.

On the Castel Sant’Angelo there is a statue of the Archangel Michael, which shows the angel putting the sword in its sheath.

The angel is said to have appeared at this point to indicate that the plague epidemic in Rome is nearing its end. Archive: Manfred Becker-Huberti

The Michael Memorial Day is associated with proverbs: The gardeners used the motto: “A tree planted by Saint Michael, it grows from the hour” on command. A tree, planted on Candlemas [= February 2nd] only, see how you teach it to grow “.

A weather rule reads: “It rains gently on Michel Day, followed by a mild winter”. Michaeli’s day has been a deadline, lottery and weather day for centuries; it was linked to taxes, work bans, harvest customs, changes of servants, fairs, youth parades, school graduation.

On Michael’s Eve, Michael’s fires were lit in the past. They were a sign that artificial light was used from that day on. The associated saying goes: “Mariä Candlemas blows out the light, Saint Michael lights it up again”.

The three Saturdays after Michaelmas were called “Golden Saturdays” in the old days. Its name is derived from the “golden masses” that have been celebrated on these Saturdays in honor of Mary since the 14th century as atonement for the past of the year.

The services and days were called “golden” because of the excellent effect that was ascribed to them. According to a – but later – legend, Emperor Ferdinand III. (1636–1657) introduced the celebration.

Messenger of God, protector of mankind – insurance advertising shamelessly uses the knowledge of angels: because the guardian angel supposedly does not always pay attention, insurance is safer.

Hardly any hit leaves the angel – or in new German: the “angel” – as a cliché for the adored.

Despite everything: Behind the superficial exploitation of angels, people seem to have faith in God’s messengers and their guardian angels.