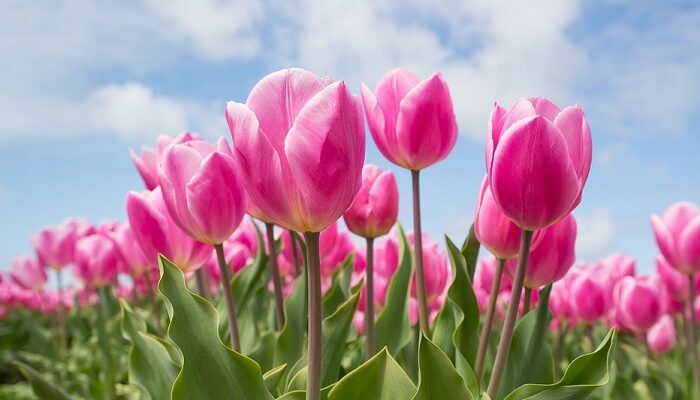 A tulip for many of us, if not the most beloved, then undoubtedly one of our favorite flowers. These delicate spring flowers are a symbol of the holiday and true pure Love. In Turkey, Iran, and other Islamic countries, the tulip is a flower that is revered for its blessed meaning.

Tulip in Islam Why is a tulip flower considered sacred? It turns out that it is inextricably linked with the main name of God, which in Arabic is denoted by the word “Allah”.

Therefore, it is believed that the tulip is the flower of the Almighty. And the whole point is in the Arabic script, which was previously used by the Turkic peoples instead of the current Latin alphabet (among the Turks) and Cyrillic (among the Tatars).

People of the past perceived this as an indication of the inner mystical connection between tulip and calligraphy of these words.

Turkish calligraphers used this symbolism very actively. There are countless works where “Allah” is written in the form of a tulip flower, or these two words are adjacent to each other.

Sometimes the image of a tulip even replaces the word “Allah”! Also, “Allah-tulip” can be found in a graphic ensemble with the main symbol of Islam – a crescent, the Arabic designation of which – “hilal” – again consists of the same letters as the Arabic “Allah” and the Turkic name of the tulip.

It is interesting that the tulip is the main motif in the Tatar and Bashkir folk ornament. For example, you can see bright red tulips (a symbol of God) as decoration not only on the vestments of imams, but also on the emblem of the Republic of Tatarstan.

And in the Bashkir Republic, in Ufa, there is a mosque-madrasah “Lyalya-Tulpan”, the minarets of which look like unblown tulip buds, and the main building looks like a fully opened flower.

In general, the geometric patterns of the East are dominated by squares, circles, triangles, stars, multi-petal flowers, weaves like a lotus and its stem.

By the way, in the medieval art of the Muslim East, there is a type of ornament called islimi. It is a spiral connection with bindweed leaves. It is believed that this pattern glorifies the beauty of the earth, reminds people of the Gardens of Eden. 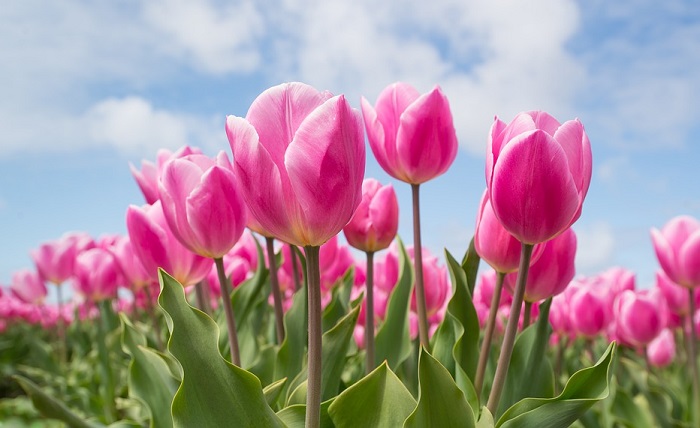 He also expresses the idea of ​​a person’s spiritual growth, reflected in a continuous developing shoot, the path of which includes many options for his growth, the interweaving of various circumstances of the world.

“Fadeless Color” It is known that flower symbolism is widespread not only in Islam, but also in other religious traditions.

For example, one of the traditional symbols of Christianity is the lily, which is considered the “flower of the Virgin Mary”, a symbol of spiritual purity. Many saints are depicted in icons with a lily branch.

For example, the Archangel Gabriel (icons of the Annunciation and others), and of course, the Virgin Mary (the icon “Fadeless Color”). The lily was especially loved in Italy and Spain. Here it was customary to approach the first Communion wearing wreaths of lilies.

Lotus in Egypt In fact, the symbol of the flower is rooted in the most ancient symbol of human spiritual development – the lotus flower, which is most often found among all peoples of the world. His veneration is largely associated with the primordial spiritual practice of the Lotus Flower, leading to the awakening of the lotus soul.

This spiritual practice has existed as long as there is a person, which is confirmed by numerous ancient sources. In Egyptian myths and legends, it is said that the sun god Ra was born from a lotus flower.

“In China, it is believed that in a special “western sky” there is a lotus lake and every flower growing there is associated with the soul of a deceased person …

In Greece, the lotus is considered a plant dedicated to the goddess Hera. In a golden sun boat made in the shape of a lotus, Hercules made one of his travels.

All these legends and myths were born on the real facts of self-education of people, thanks to this ancient spiritual practice.

With the gradual loss of spiritual knowledge, many of us have ceased to understand the sacred meaning of certain images in religious art.

But everything is in our hands! If each of us begins to expand our horizons of knowledge, this will serve as an impetus for the revival of spirituality not only in ourselves, but also in society as a whole.

Everything has its own meaning. We are a people looking for special meaning in everything. Previously, words were divided into meaningful and insignificant, animate and inanimate. Words affect the mind and consciousness of a person. Of course, if they are of particular importance…

The Creator gave man five “tools” that everyone should use correctly. One of them is the eyes. As al-Farabi said, the eye is divided into “internal” and “external”. The regular eyes on the face are the outer eye, and the heart eye is the inner eye.

An educated person is interested in the world, the environment, and himself. Everything is interesting to him. Such a person is passionate about life. But not everyone is like that.

There are categories of people who do not see anything, even if their eyes are open, they do not notice anything. Such people can live without finding meaning in their lives.

At birth, a person thinks only about food and sleep, and then, growing up, looks around with interest. Then he starts asking questions: why, what, how? He is looking for meaning in the world around him. It all starts with the question “what?”

And this question arises from surprise and from interest. A person wants to study, to know – fire appears in the eyes. And some people have a veil in front of their eyes, he does not see anything. However, this is not what I wanted to say…

Basically, nature and the power of nature pleases our eyes. The Almighty just created a tulip for the joy of people. A person admires the beauty of this flower. As if the Almighty specially created such beauty in order to attract a person’s attention to himself.

A person looks at a tulip with an outer eye, but then he begins to feel the Creator with an inner one. When the inner eye opens, it will begin to seek its Creator. That’s the problem…

The tulip occupies a special place in the worldview of the Kazakhs and Islam. In Islam, abjad gives special information about the tulip. The numerical value of the words “Allah” and “Allah” in the Qur’an according to abjad is 66.

The word “Allah” consists of three letters: “alif”, “lam”, “a”. And in the ancient Turkic language the tulip is “lalak”, that is, there are three similar letters with the word “Alla” in the Ottoman language.

According to Abjad, the numerical value of the word “tulip” is 66. This feature in the Turkic religion has the meaning “the mirror of the Creator in nature”.

In Turkic Islamic literature, especially in Sufi poetry, the prophet was depicted as a flower, and Allah as a tulip. Interestingly, the three letters in the ilal tulip are also found in the word “crescent”.

This word also has a numerical value of 66. On the basis of this similarity, it is recognized in the Turkic Islamic culture that “Alla”, “lalak-tulip” and “crescent” have a spiritual spiritual meaning.

The image of the tulip in the history of Islamic culture can be seen in architecture and calligraphy in the Ottoman era in the 16th – 17th centuries.

Especially in the era of King Qanuni Sultan Suleiman, people created new types of tulips, improved them and extolled them as a high value.

The high rating of tulips is based on the similarity of the words “Alla” and “Hilal-crescent” and similar numerical values ​​of the letters. In art, the tulip is glorified in ornaments and patterns.

The flower is made of stone, iron, wood, printed on fabrics, carpets with its image are woven – this has become a kind of art style. Tulip in the Arabic alphabet according to Abjab is represented in a value from 1 to 1000.

It is used in history, astronomy, astrology, and architecture. The tulip symbol in Sufi philosophy means “love for the prophet.” They turned their attention to every stage of the tulip’s opening.

In the works of H. A. Yasawi, the tulip is known as the “righteous flower.” A person must love a person as created by the Creator. In Yasawi’s philosophy, “eighteen thousand of the world” is defined as a garden. A garden for a person. A person visits this garden only on the path indicated by the Creator. This is the way of Sharia. The Creator requires nothing but this road.

But a person is carried away by secrets, secrets, meanings. For people in depression, the Creator created flowers and tulips in the garden.

A beautiful tulip attracts a person’s attention. Believers are attracted to the tulip. This means that the tulip is a symbol of love for Allah.

In Islam, the image of a tulip is similar to the inscription “Allah”. The tulip in the spelling of Yasawi’s dhikr and the images of the “heart” is indicated by the letter “u”.

If a person constantly pays attention to himself, the world around him, he will always meet a tulip. And this tulip will lead to the Creator.

Therefore, taking care of a tulip and admiring it is the norm for every person.

The tulip is the beauty of not only this world, but also the other. And a person is in harmony with beauty, conscience, humanity and natural perfection.

For the holidays, we are used to not just giving bouquets, but to invest a special meaning in gifts.

With tulips, it seems, everything is simple: they mean the arrival of spring. But is it really so? We studied how the meaning of a flower has changed since its cultivation.

The first images of tulips were found in the Middle East and date back to the 11th century. Culturologists say that the flower personified peace, spiritual rebirth and tranquility.

The combination of simplicity and sophistication in it corresponds to Eastern philosophy: the beautiful does not tolerate pretentiousness, but is hidden in ordinary things.

Due to the fact that tulips are among the first to bloom after the winter cold, since the middle of the twentieth century they have become a popular gift for International Women’s Day.

And again their meaning changes. At the beginning of spring, they are presented to emphasize femininity and beauty, to give joy and spring mood.

They are associated with the beginning of a new life and the arrival of the long-awaited warmth. This value has remained with them to this day. Tulips are a must-have gift for March 8, when you want to see the smiles of dear and beloved women.

This is how the symbolism of the spring primrose changed. Most of the interpretations were prescribed based on the circumstances in which the flower grew.

The current meaning of a bouquet of tulips does not at all correspond to its original understanding.

Selam, or the art of composing a message using living buds, is not associated with real events, but originates from myths and legends. There is a Persian legend about the tulip, according to which the king had a beloved.

Choosing a bouquet of tulips as a gift, you are presenting a sign of wishes for spiritual harmony, wealth and material prosperity.

You can give it to compliment or confess your love. As it turned out, a simple and unpretentious flower has so many interpretations that it is suitable as a present for any occasion. You just have to choose a shade and enjoy the words of gratitude and smiles of loved ones and loved ones.